The 'Fancy' hitmaker hits out at perceived misogyny in the industry, claiming, 'No one ever assumes a woman is making choices from a position of power/control.'

AceShowbiz - Iggy Azalea hates having to "prove" herself to other people. The 32-year-old rap star has taken to social media to hit out at perceived misogyny, revealing that she hates being asked to prove that she's "making choices from a position of power."

Iggy, who was born in Australia, but moved to the U.S. during her teens, wrote on Twitter, "No one ever assumes a woman is making choices from a position of power/control. Women have to PROVE that they are over and over again. I hate that."

Iggy Azalea hit out at perceived misogyny in the industry.
Editors' Pick

Iggy previously confessed to feeling "utterly deprived of a personal life" during her music career. The rap star recently took to social media to offer advice to aspiring music stars, admitting that her own path towards fame and success hasn't been straightforward.

The "Fancy" hitmaker, who has Onyx, two, with ex-boyfriend Playboi Carti, wrote on the micro-blogging platform, "Here's the thing I think everyone working hard toward a dream should know. On the road to ur goal there will be moments u feel insane, utterly deprived of a personal life and like everything's falling apart. When u reach ur goal… u will still have those moments. Its normal. (sic)" 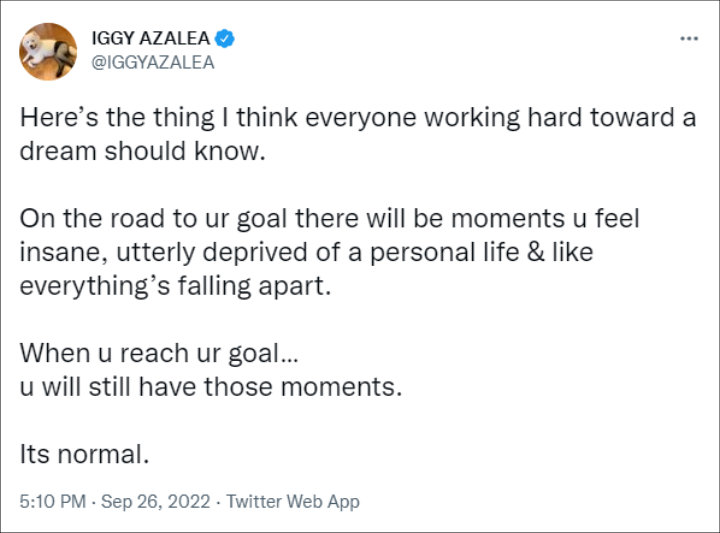 Iggy announced in 2021 that she was taking a break from music for "a few years" to focus on "other creative projects." However, the rap star later confirmed her return to the music scene via a Twitter post. Iggy wrote online, "A year ago I was willing to walk away from music because I was tired of the negative energy it attracted. But what I've learned is that even when I'm minding my business, y'all gonna be negative AND nosey. So if I can't have peace, neither can you. I'm coming back. Cry about it."

Grammys 2023: Lizzo and Harry Styles' Big Wins Round Up the Winner List