Iggy Azalea Details Obsession With Car: I 'Can't Get Enough' of Them

The 'Fancy' hitmaker, who is a self-confessed car enthusiast, admits in a candid social media post that she would much prefer to get a new vehicle than a new handbag.

AceShowbiz - Iggy Azalea has detailed her obsession with car. In a candid social media post, the chart-topping rap star, who is a self-confessed car enthusiast, admitted that she "can't get enough" of cars.

The "Fancy" hitmaker revealed that she'd much prefer to get a new vehicle than a new handbag. The 32-year-old musician, who was born in Australia before moving the U.S. during her teens to follow her music ambitions, wrote on Twitter, "I like bags for the way they look but I'm not a bag person."

"I hate carrying a bag around," Iggy further explained. "Don't buy me a bag if you're reading this. Buy me a CAR Love cars can't get enough of them ughhhh….. (sic)"

Iggy was subsequently asked whether she had ordered the Range Rover she'd previously spoken about. The "Pretty Girls" hitmaker replied, "I already ordered it months ago hehehe (sic)" 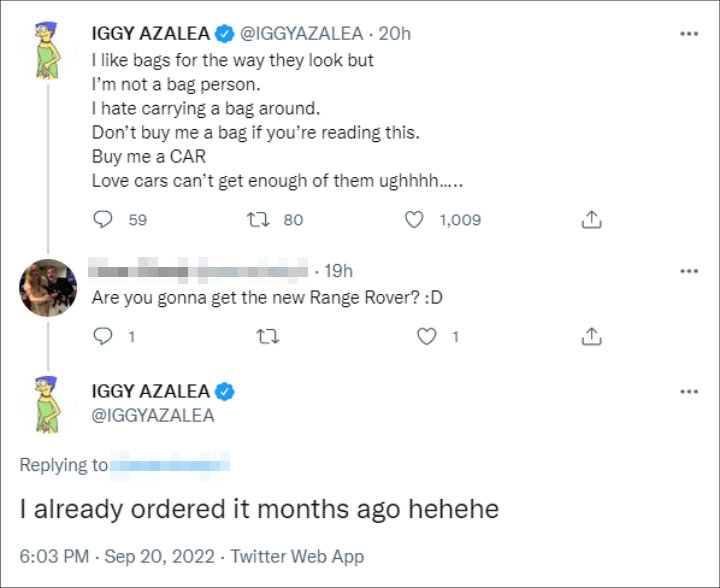 Last year, Iggy announced she was taking a break from music for "a few years" to focus on "other creative projects." However, the rap star later confirmed her return to the music scene via a Twitter post. Iggy wrote, "A year ago I was willing to walk away from music because I was tired of the negative energy it attracted. But what I've learned is that even when I'm minding my business, y'all gonna be negative AND nosey. So if I can't have peace, neither can you. I'm coming back. Cry about it. (sic)" 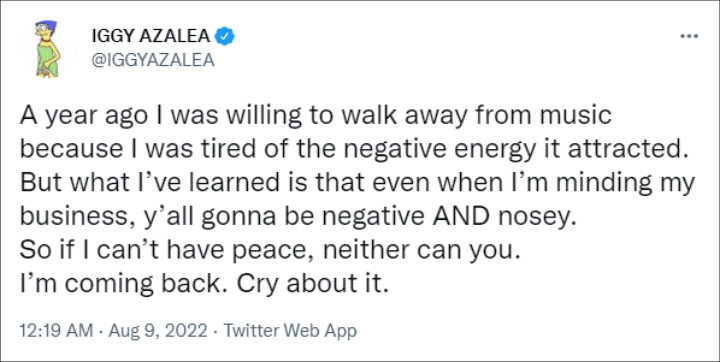 Iggy Azalea confirmed her return to music after brief hiatus. 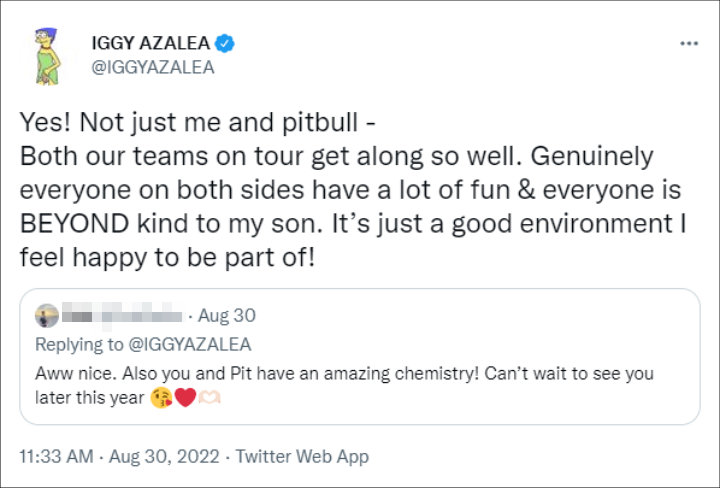 Iggy Azalea revealed that she had so much fun during her tour with Pitbull.

Earlier this year, Iggy returned to touring alongside Pitbull, and the rapper revealed that she relished the experience. Iggy, who has Onyx, two, with ex-boyfriend Playboi Carti, said on social media, "Both our teams on tour get along so well. Genuinely everyone on both sides have a lot of fun and everyone is BEYOND kind to my son. It's just a good environment I feel happy to be part of! (sic)"