Iggy Azalea Rips an Article Pitting Her Against Nicki Minaj

The 'Fancy' raptress shuts down New York Post's article on 'A history of Nicki Minaj's feuds' that mentions her among several female A-list artists whom the 'Super Freaky Girl' has allegedly been feuding with.

AceShowbiz - Iggy Azalea doesn't want the smoke, particularly not with Nicki Minaj. The Australian femcee has called out a news outlet for publishing an article that claimed she had a beef with the Trinidadian-born star.

New York Post recently published an article that broke down "A history of Nicki Minaj's feuds" with a number of A-list female stars in the industry. According to the site, the "Anaconda" hitmaker had bad blood with Iggy in addition to Mariah Carey, Miley Cyrus and Cardi B.

Catching wind of the article, Iggy quickly shut down the report. "Why am I in this?" she replied to NY Post's tweet about the article. She went on claiming, "We've never said anything bad about one another. Y'all weird." 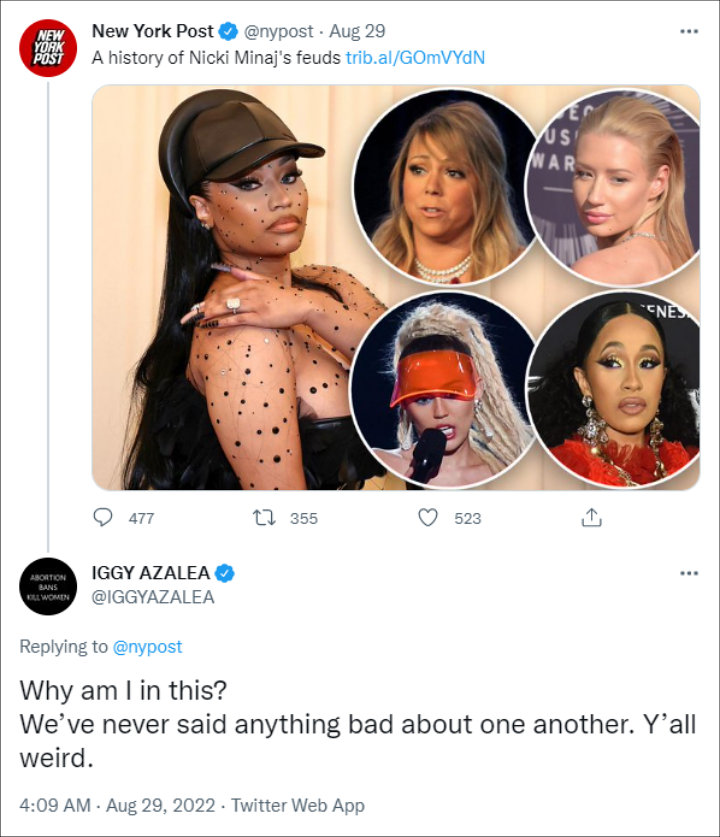 Iggy Azalea clapped back at an article pitting her against Nicki Minaj.

According to the article, the feud started after Iggy threw a subliminal diss at Nicki for her BET performance in 2010. Nicki later made comments about ghostwriters at the 2014 BET Awards, which was perceived as a shot at Iggy, who had a hit with "Fancy" at the time. During her acceptance speech for winning Best Female Hip-Hop Artist, she said, "When you hear Nicki Minaj spit, Nicki Minaj wrote it."

Nicki, however, clarified that she wasn't taking aim at Iggy with her speech. "The media puts words in my mouth all the time and this is no different. I will always take a stance on women writing b/c I believe in us!" she penned on Twitter "I've congratulated Iggy on the success of Fancy, publicly. She should be very proud of that. All the women nominated should b proud."

Iggy has also responded to a viral clip of her choosing Cardi B's song over Nicki's in an old Power 106 interview, saying that it was not a personal attack on Nicki, but based on her preference. "That part. I can like whatever music i want lmaoooooooooo," she tweeted. "A song is a song, I'm not part of y'all weirdo lol wars."