The 'Bloody Valentine' hitmaker shares via his Instagram Stories videos of his face gushing with blood after he smashes a wine glass over his head during his Cleveland concert.

AceShowbiz - Machine Gun Kelly's onstage antics continue while he's on tour. The rapper/singer has shown off his bloody face yet again after smashing a wine glass over his head during his latest "Mainstream Sellout" tour stop over the weekend.

On Monday, August 15, the 32-year-old took to his Instagram Stories to share videos of his face gushing with blood. "Oh my God, Cleveland," he said in one of the clips while going shirtless, showing an array of tattoos over his chest and hands. "That was f**king insane."

In another clip, MGK gave fans a closer look at the bloodied gash. "They didn't tell you I went back to the stadium at 5 A.M. and tried to sleep in the middle of the field LMAO," he shared a TMI to his followers. 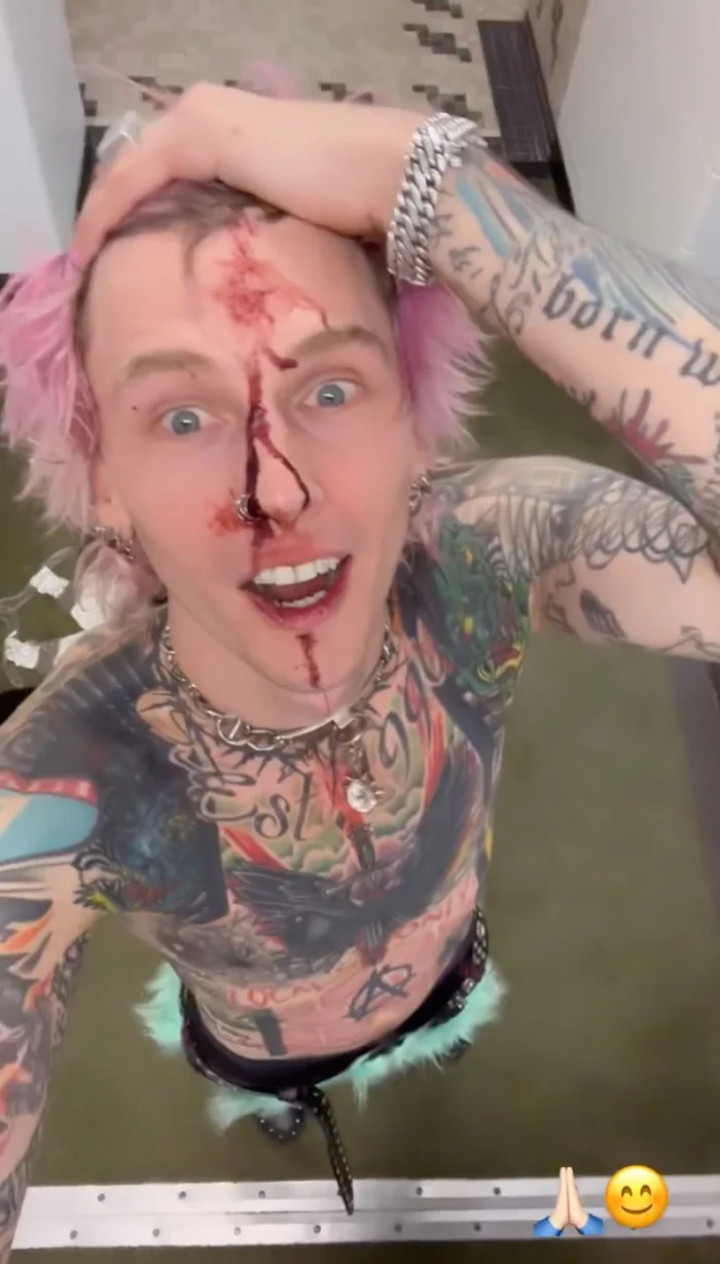 MGK injured his head while performing at the FirstEnergy Stadium in Cleveland on Saturday night, August 13. Footage from the concert showed fans cheering as the hip-hop artist declared, "I'm rich, b***!" before chugging a glass of wine and smashing the glass.

MGK also refused to stop his concert although he revealed that he would be fined $70,000 for each additional 10 minutes the show goes on. "You know what I say to that? 'I'm not stopping this show for s**t. I'm rich, b***h,' " he adamantly said.

During the concert, MGK pulled a stunt as he zip lined the entire length of the stadium. Sharing a clip of the wild stunt, he captioned it, "til i die."

A source told Page Six earlier this week, "It was his idea and was executed in less than 24 hours. The zip line was erected that day to take him from the top of the Browns' stadium across 50,000 fans to the opposite side of the field."

The source added, "He announced to the audience that up until a few hours before the show he was told it couldn't be done. It was a thrilling moment from any angle as you can see from the many videos circulating."

Back in June, MGK also hit his own forehead with a champagne glass at the after-party of his NYC concert at Madison Square Garden. Earlier that night, during the sold-out gig, the "Bad Things" hitmaker was caught storming off the stage before yelling at a male employee. It was unclear what made him lose his cool, but another crew member was able to hold him from attacking the employee.

During an appearance on "Late Night with Seth Meyers", MGK admitted he "feels like s**t" after the bloody injury. He also explained that he smashed the bottle into his head because he didn't have a fork to make the traditional gesture of clinking it against the champagne flute. He said, "You know when you clink a champagne glass with a fork to kind of (get people's attention)? Yeah, well, I didn't have a fork, so I just clinked it on my head."