The 'Real Housewives of New Jersey' star is mocked by social media users as she piled her locks into a very large bun that was held in place by a bedazzled crown during her wedding to Luis Ruelas.

AceShowbiz - While millions of "Real Housewives" fanatics were dying to get a glimpse of Teresa Giudice's nuptials, many were left unimpressed by her wedding hair. The Bravo personality has been heavily mocked by social media users over her gigantic hair when she tied the knot with Luis Ruelas.

For her special day which took place on Saturday, August 6, "The Real Housewives of New Jersey" star piled her locks into a very large bun that was held in place by a bedazzled crown. Fans have since joked that she might be hiding something in it. 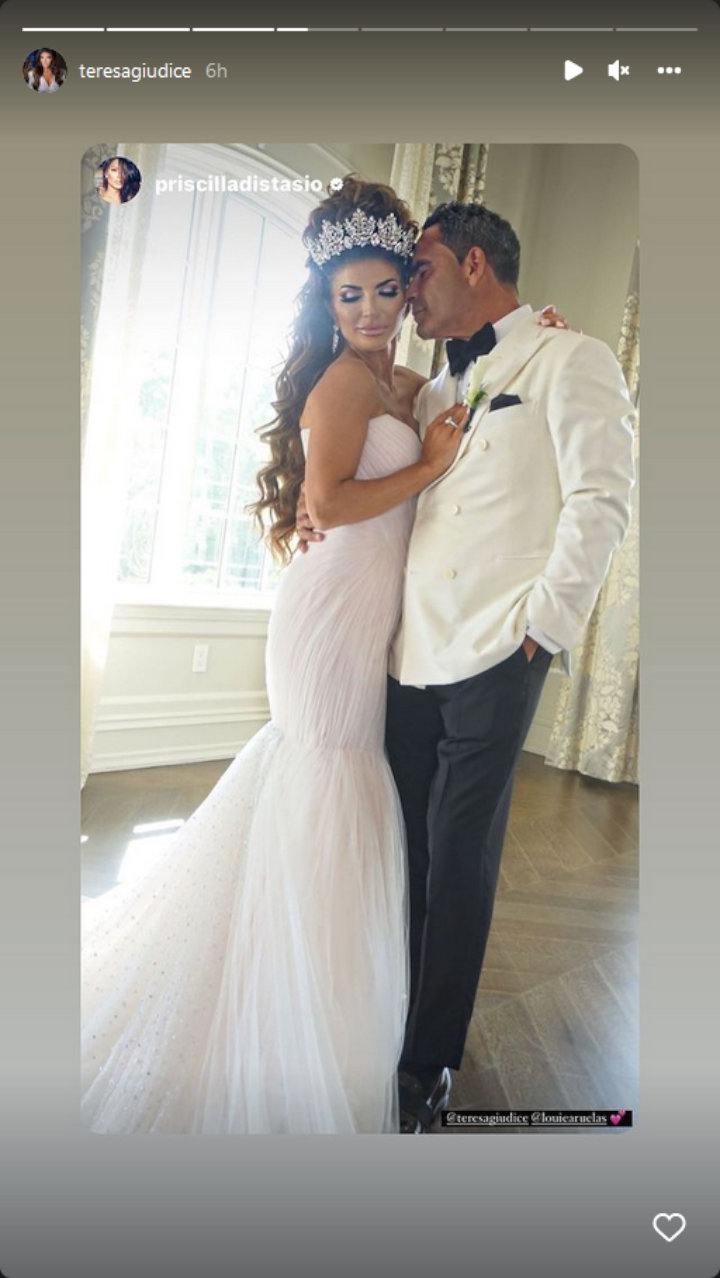 "I sincerely hope Bravo hid a GoPro in Teresa Giudice's hair to film the wedding," one person quipped. Another jested, "Unconfirmed reports say Joey and Melissa have snuck into Teresa's wedding in her hair," referring to Joe Gorga and Melissa Gorga's absence from his sister's wedding amid their feud.

A third user was curious about "the exact weight of Teresa Giudice's wedding hair." A fourth person remarked, "When you tell your wedding hair dresser to give you the Snooki special," while another enthused, "Who knew...the pile up on the Garden State Parkway was @Teresa_Giudice hair, not weekend shore traffic."

Someone was apparently rendered speechless as writing, "Teresa's hair.......why did anyone let her hair look like that......" Another wondered, "Why didn't anyone tell teresa her hair was a disaster even for a wedding in New Jersey!" Another hilariously commented, "Don't ask me for anything this week my brain now belongs to Teresa Giudice's wedding hair."

However, there were a few who still support Teresa regardless her hair style. "The higher your hair, the closer you are to heaven. This is the old school Teresa I fell in love with! Queen of New Jersey!" one of the fans wrote. Another claimed, "Sis said if you gonna do it do it big!" A third fan summed up the supportive comments as writing, "Teresa looks so happy. That's all that matters."

Teresa and Luis exchanged wedding vows in front of 220 guests at the Park Chateau Estate & Gardens in East Brunswick, New Jersey. The bride looked glamorous in a long, strapless white mermaid gown from Mark Zunino featuring a sweetheart neckline that she paired with white lace gloves. She completed her look with a crown made of diamonds. Meanwhile, Joe looked dapper in a white blazer, black pants and a classic black bow tie.