In the wake of the overturn of Roe v. Wade, the 'What About Us' singer makes use of her Twitter account to share a message for fans who support the Supreme Court's decision regarding women's rights to abortion.

"Let's be clear: if you believe the government belongs in a woman's uterus, a gay persons business or marriage, or that racism is okay- THEN PLEASE IN THE NAME OF YOUR LORD NEVER F**KING LISTEN TO MY MUSIC AGAIN," she wrote on Saturday, June 25. "AND ALSO F**K RIGHT OFF. We good?"

Her tweets earned more than 170,000 likes, but some people slammed her for the post. "So you don't like people telling other people what to do but you're also telling people not to listen to your music? Seems about right," someone wrote. Another user said, "As much as I paid to watch you in Vegas, I'll listen to your music anytime I feel like it. Now go sing and dance and entertain us for a few hours. Leave the constitution to those who understand it. We good?" 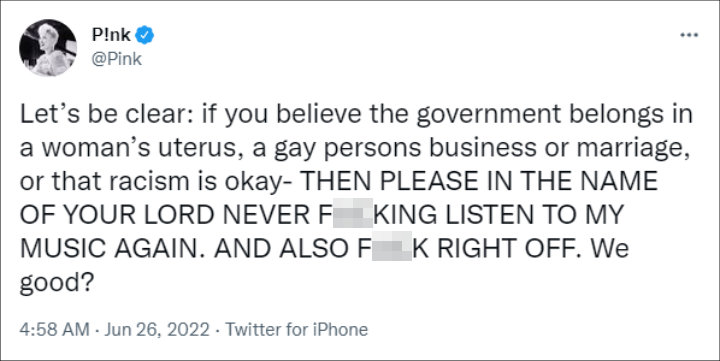 Pink reacted to the overturn of Roe v. Wade.

The critics didn't make Pink back down. The musician applauded fellow singers Olivia Rodrigo and Lily Allen, who dedicated Lily's "F**k You" to Conservative Justice Clarence Thomas and the other Supreme Court justices who voted in favor of reversing Roe v. Wade during their performance at the Glastonbury Festival in England. Pink, who has spoken out before against state bills and laws restricting abortion access, tweeted, "Thank you Olivia and Lily."

Thomas voted in favor of reversing Roe v. Wade. In his concurring opinion, he wrote that the Supreme Court should also "reconsider all of this Court's substantive due process precedents, including Griswold, Lawrence and Obergefell." He's referring to precedents that safeguarded personal freedoms such as the right to obtain contraception, same-sex intimacy and gay marriage.

Meanwhile, the court's three liberal justices, Stephen Breyer, Sonia Sotomayor and Elena Kagan, signaled in their joint dissent that abolishing the constitutional right to abortion could pave the way toward the end of other freedoms, including those involving contraception and same-sex intimacy.

Artist of the Week: Beyonce Knowles