Addison Rae Reacts to Drake Photoshopping Her Hand to His Pic

In a Twitter post, the TikTok star and actress points out that the 'In My Feelings' rapper edits her hand on top of his face in one of the pics that he shares on Instagram.

AceShowbiz - Addison Rae responded to Drake posting a Photoshopped image of her on his Instagram account. In a Twitter post on Tuesday, May 31, the TikTok star pointed out that the rapper edited her hand on top of his face in one of the pics that he shared.

The said picture featured the "In My Feelings" spitter sticking his tongue out. A woman hand, which wore a watch and beautiful manicures, appeared to touch the top of his head.

After catching wind of Drake's post, Addison claimed that it was her hand that was featured in the picture. "This was way too familiar," the "He's All That" actress wrote on Twitter alongside a side-by-side of Drizzy's image with one of hers from months before. 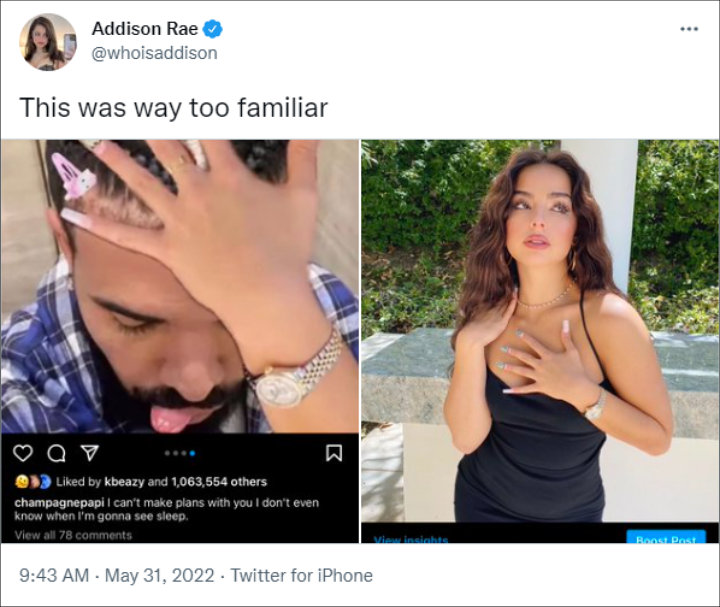 Fans had mixed reactions to the whole thing. One fan asked the two to release a collaboration, writing, "i speak for everyone when i say we need an addison rae song with drake." Another wrote, "Drake too damn old to be taking pics like the first one bruh like u 35 dawggg."

Meanwhile, some other fans accused the Canadian star of "copying" NBA YoungBoy a.k.a. YoungBoy Never Broke Again. On May 27, YoungBoy posted a picture of a woman's hands wrapped around his face.

That aside, Drake previously made headlines after he shared a heartwarming video to his Instagram Stories of him with his son Adonis. The clip saw the musician asking his son how he got so good at playing basketball before capturing a priceless response from the 4-year-old.

"I shoot at school!" Adonis said with a shrug. He added, "Also, send that to our girl!"

In another Instagram video, he showed Adonis pounding his chest like LeBron James. Drake tagged King James to ask where his son was getting all of his "mannerisms" from. In response, the athlete said, "My nephew really love the game."