Responding to the 'Buss It' raptress' statement, the 'TWINNEM' hitmaker shows off her accomplishments, noting that she has 'millions of monthly listeners' and '6 nominations with no album.'

AceShowbiz - Coi Leray has responded to Erica Banks' statement that Nicki Minaj only works with girls who don't know how to rap. Taking to social media, the "TWINNEM" raptress laughed off the claims.

Making use of her Twitter account on Sunday, April 17, the "Blick Blick" hitmaker quote-retweeted a post that contains Erica's interview with Revolt TV's "Big Facts". Along with the tweet, the 24-year-old hip-hop artist wrote several laughing with tears emojis. 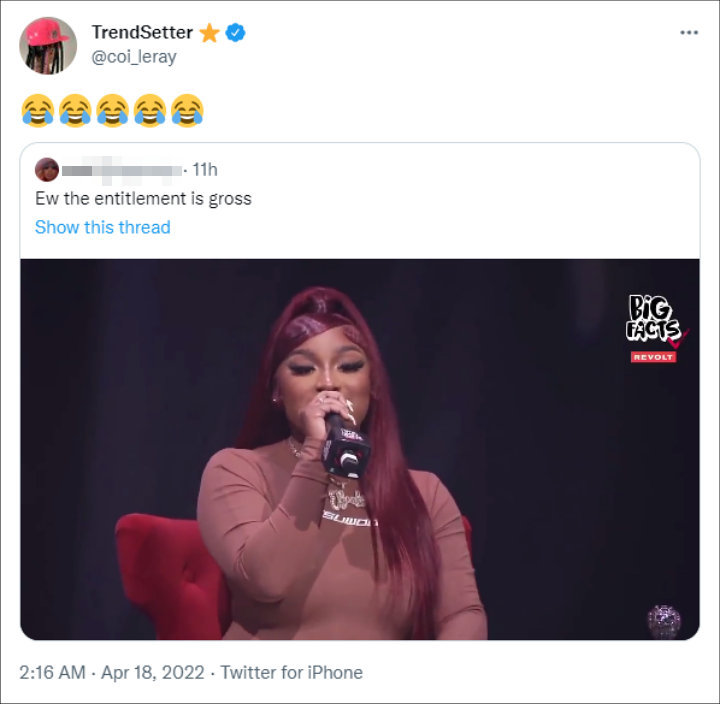 Coi Leray responded to Erica Banks' claims that Nicki Minaj only works with girls who don't know how to rap.

Not stopping there, Coi also showed off her accomplishments in a separate tweet. "My debut album has over 315k album sales [fire emojis]. 4 Billboard top 100 entries (No More Parties , No More parties Remix, Big Prrd, Blick Blick," she tweeted. She later added, "6 nominations with no album . Millions of monthly listeners . TRENDSETTER THE ALBUM OUT NOW." 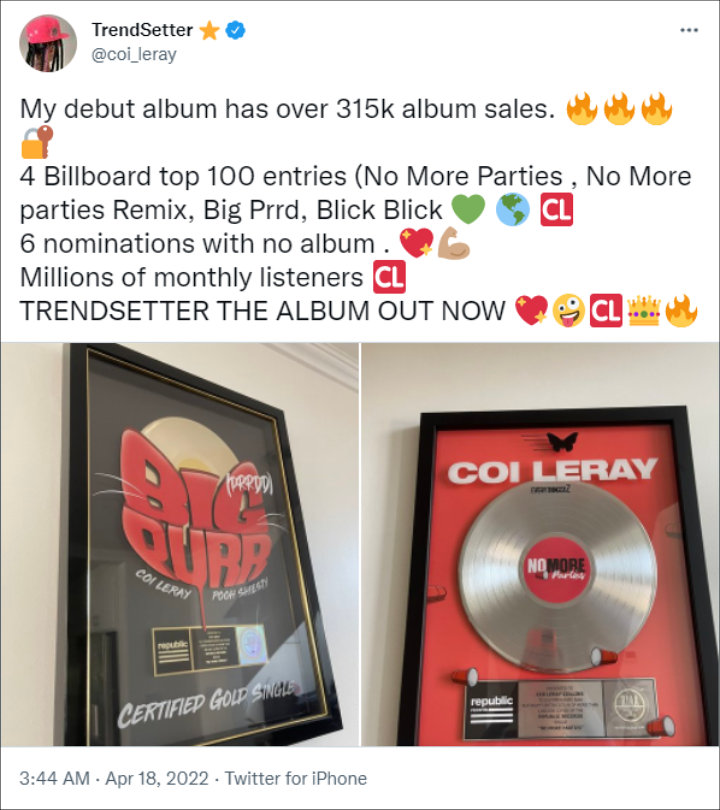 Many fans were quick to applaud her for standing up for herself. "Coiiii [laughing with tears emojis] this is why i love this b***h she so savage," one fan replied to Coi's tweet. Others, in the meantime, believed that Erica said that only because she wanted to have a collaboration with Nicki. "If you wanna work with nicki just say that," one Twitter user wrote. Another chimed in, "Want a Nicki feature keep on wishing baby."

In the interview, Erica said, "Well you know, I love Nicki but I just feel like I've been tryna reach out to her for a long time and I just feel like she really ignored me." The "Buss It" raptress elaborated, "And I feel like she entertains the girls who really don't even know how to rap you know what I'm saying? And my feelings hurt."

"Now some people might get mad at me for saying that but it's the truth, okay?" Erica continued. "Everybody can't rap so anyway, Nicki got upset that I agreed with the person and she said 'Bloop imma block you then. Since you wanna be ungrateful, imma block you.' "

Coi and Nicki's collaboration, "Blick Blick", was released on March 18. The irresistible bop, which is a part of Coi's debut album "Trendsetter", secured No. 1 on the U.S. iTunes chart less than two hours after its release. As for now, the song has been streamed more than 10 million times on Spotify and its MV has garnered over 15 million views.