The 23-year-old 'RAPSTAR' hitmaker shares the backstory of his hit 2019 single to celebrate his new milestone as the video has reached 100 million views on YouTube.

AceShowbiz - Polo G celebrated the milestone  of his hit 2019 single "Heartless" by sharing a shocking back story of the music video filming for the track. In a new Instagram post, the rapper shared he was almost overdosed before the taping.

"Back story Fa Dat video I was Fresh out the hospital bed From almost overdosing Onnem pills I pop right back out," the "RAPSTAR" spitter said of "Heartless" music video, which has garnered 100 million on YouTube. "Shoot Dat Video now dat b***h Platinum w 100ms By it." 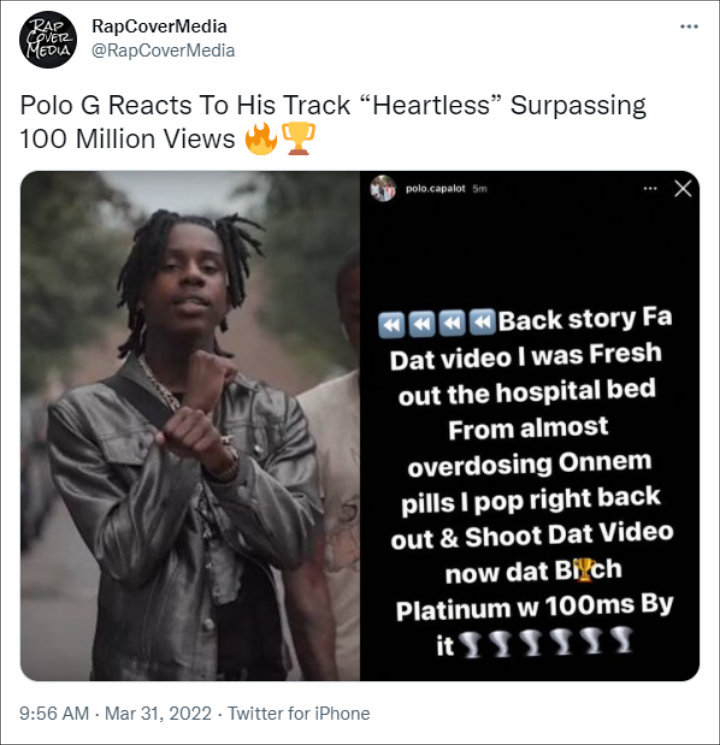 Polo G first talked about  the experience back in December. In an interview, the 23-year-old rapper shared that he ended up in the hospital after losing count of how many pills he popped at a party the night before.

"When I woke up, I was in the hospital," he recalled. "And my pops was just explaining to me like 'they said, '[Iif] you would had been here any second, even a minute later, you wouldn't have made it. You probably could've passed.' "

He went on to detail, "They was walking me through everything that happened that day, because I really didn't remember at all. I think it was like 17 pills I had took in one day; about 15 Xanax and two [Ecstasy] pills. So that just made me think [about] my son, how I got to slow down off that."

The hip-hop star had a successful year in 2021 as he achieved a gold record. He closed out the year by purchasing a $4.8 million mansion in Los Angeles as well as a 5-figure-run at fashion brand Amiri to spoil himself on his birthday.