The former 'Keeping Up with the Kardashians' star faces photoshop accusations after posting beach photos in which she wears black bikini bottoms, a long-sleeved top and matching gloves.

AceShowbiz - Kim Kardashian has once again become the victim of a photoshop fail. After fans noticed that there's something wrong in her bikini photo, the former "Keeping Up with the Kardashians" star was quick to delete the pic and replace it with the new one.

In the said image shared on Instagram along with some other photos, the reality TV star is seen posing by the beach in black bikini bottoms, a long-sleeved top and matching gloves. However, what stole people's attention the most was her right leg, which appeared to be distorted. 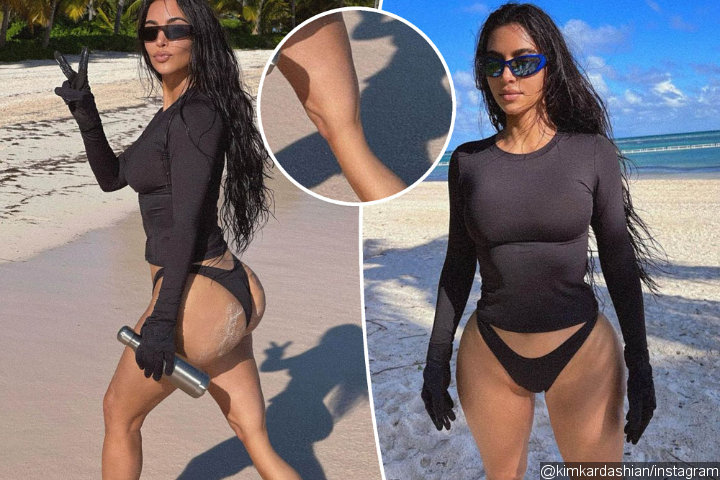 Many online users have since screenshotted the post and re-shared it on Reddit and Twitter. "What is with her right leg in between her knee and calf. It looks thin and stretched out?" one Reddit user asked, before another replied, "Omg horrible photoshop."

A different individual opined, "Honestly. I can't imagine being so self conscious about my 'image' that I would feel the need to photoshop my upper calf." Someone else argued, "I honestly hate how they still photoshop their pics.. and like atleast put some effort into the photo shop if you're going to do it." Meanwhile, one Twitter user wondered, "Why would she even do that? That doesn't look good. Lord."

Catching wind of the criticism, Kim took down the post and re-uploaded it. In the accompaniment of the snaps, the younger sister of Kourtney Kardashian simply wrote, "long time no sea."

This was not the first time the SKIMS founder sparked online chatter with her photoshop fail. Back in May 2020, eagle-eyed fans noticed that the estranged wife of Kanye West had a "third hand" in one of her snake-themed pictures that she posted on Instagram.