Showing his remorse, the lead singer of the rock band insists that 'the last thing' he would want to do is discrediting the 'All Too Well' hitmaker's songwriting skill.

AceShowbiz - Damon Albarn has showed his remorse over his thoughtless statement. The Blur frontman has issued an apology to Taylor Swift after he "discredits" the "All Too Well" hitmaker's songwriting skill.

On Monday, January 24, the 53-year-old musician took to his Twitter account to apologize after claiming that Taylor doesn't write her own songs. "I had a conversation about songwriting and sadly it was reduced to clickbait. I apologise unreservedly and unconditionally," he penned. "The last thing I would want to do is discredit your songwriting. I hope you understand." 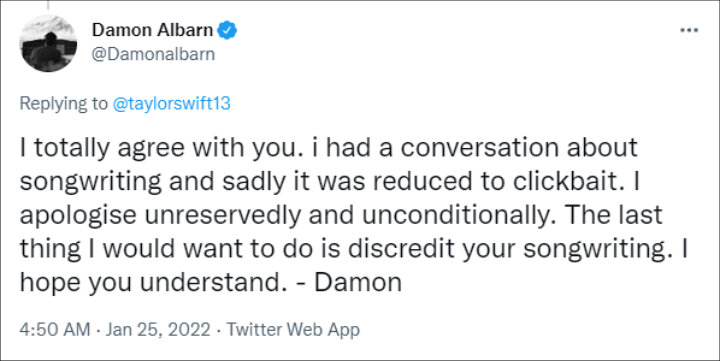 Damon Albarn apologized to Taylor Swift after he claimed that she doesn't write her own songs.

Earlier that day, Taylor, who has always been applauded for her songwriting skill, called out Damon for criticizing her as an artist. "I was such a big fan of yours until I saw this. I write ALL of my own songs. Your hot take is completely false and SO damaging," the "Love Story" hitmaker fumed. "You don't have to like my songs but it's really f**ked up to try and discredit my writing. WOW."

In a following Twitter post, Taylor mocked Damon as she clarified that she wrote her own tweet. The 32-year-old Grammy-winning singer/songwriter penned, "PS I wrote this tweet all by myself in case you were wondering." 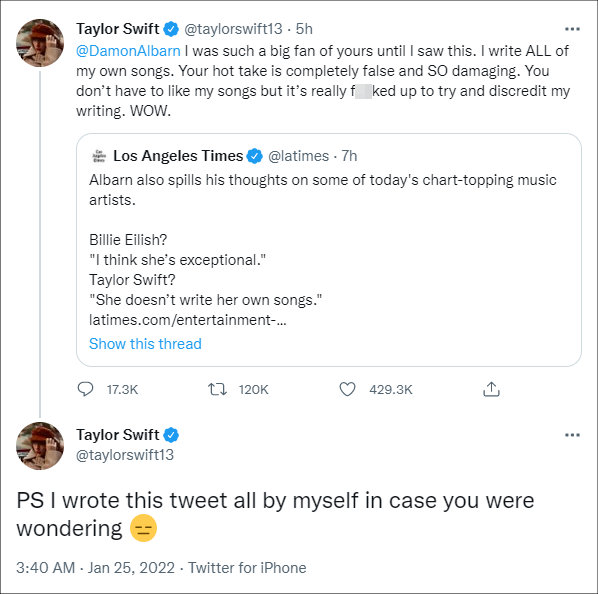 Taylor Swift called out Damon Albarn after he claimed that she 'doesn't write her own songs.'

Taylor's response came after the Los Angeles Times posted an interview with Damon on Sunday night. During the conversation, the 53-year-old British musician didn't agree with host Mikael Wood, who named Taylor as an "excellent songwriter." He alleged, "She doesn't write her own songs."

Damon took a step further by saying that even if she co-writes her music, that doesn't count. "Co-writing is very different to writing. I'm not hating on anybody, I'm just saying there's a big difference between a songwriter and a songwriter who co-writes," Damon said.

"A really interesting songwriter is Billie Eilish and her brother [FINNEAS]. I'm more attracted to that than to Taylor Swift," Damon explained. He then praised Billie and her music, "It's just darker, less endlessly upbeat. Way more minor and odd. I think she's exceptional."

Since Taylor slammed Damon, her tweet went viral and has drawn responses from other musicians. Katy Perry was spotted liking Taylor's statement. Meanwhile, Jack Antonoff, her close friend and longtime collaborator, tweeted, "I've never met Damon Albarn and he's never been to my studio but apparently he knows more than the rest of us about all those songs Taylor writes and brings in." In a following tweet, Jack added, "If you were there … cool … go off. if not … maybe …. shut the f**k up?" 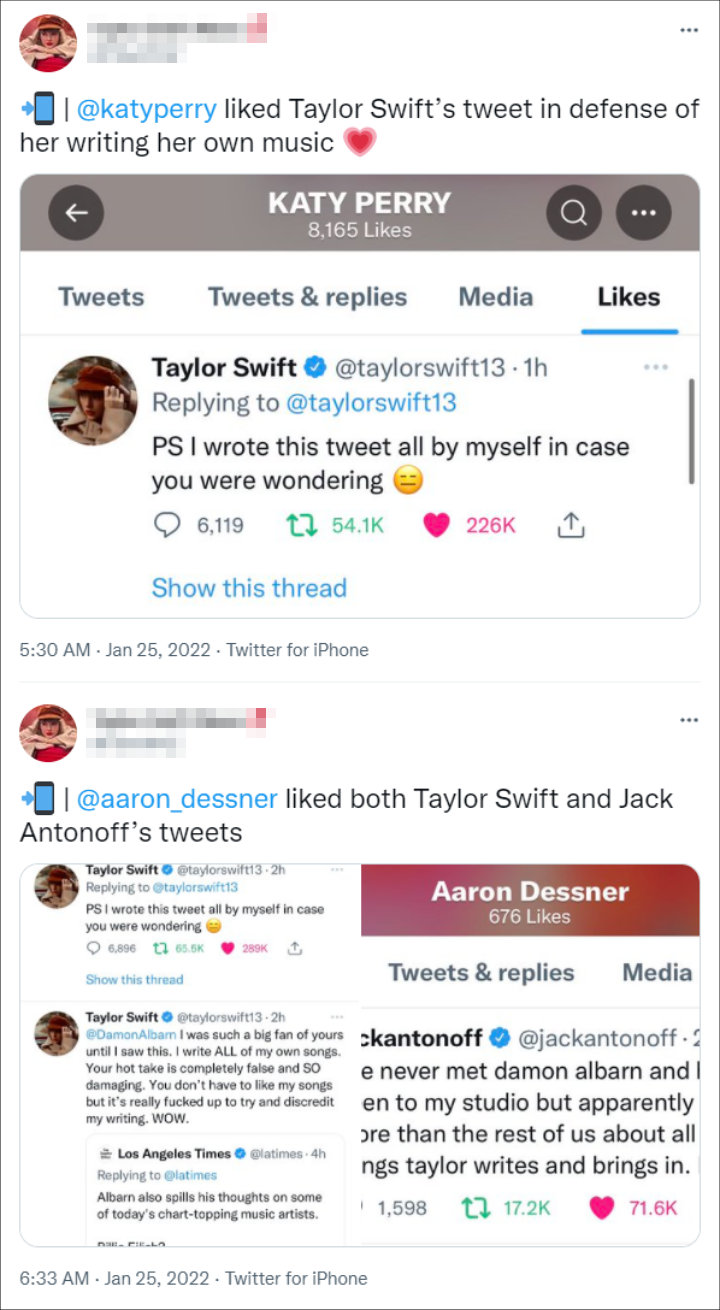 Aaron Dessner also turned to Twitter to share his thoughts. "Not sure why you @Damonalbarn would try to discredit Taylor's brilliant songwriting but as someone who has gotten to press record around her...your statements couldn't be further from the truth," so he wrote. 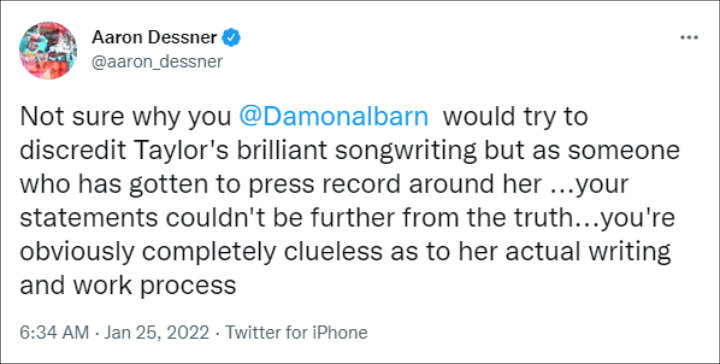 "You're obviously completely clueless as to her actual writing and work process," Aaron, who was caught liking Taylor and Jack's posts continued. In the meantime, Maisie Peters added, "Taylor swift could write song 2 but damon albarn could never write 'All Too Well' 10 minute version." 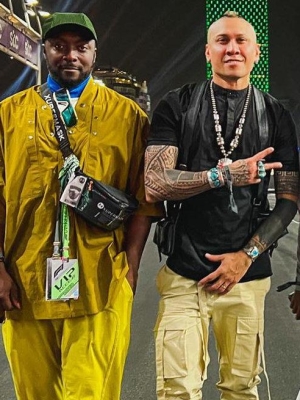