The season 24 judge of 'America's Next Top Model' receives a negative comment about her pregnancy stretch marks after she shares a video of her flaunting her pregnant belly.

AceShowbiz - Ashley Graham isn't letting anyone criticize her pregnant body. The season 24 judge of "America's Next Top Model" has clapped back at a troll who claimed that her pregnancy stretch mark could "affect" her career.

The catwalk beauty, who is currently expecting twin boys with her husband Justin Ervin, has responded to a negative remark written by an Instagram user. After she shared a video of herself baring her growing pregnant belly on her page, a body shamer commented, "I had twins but I did not get any stretch marks. I hope that does not affect your career."

Ashley then took a screenshot of the comment and reposted it on her Instagram Story. Over the snap, the 33-year-old model wrote, "Gosh - hope I still have a career with my stretch marks," adding face with rolling eyes emojis. 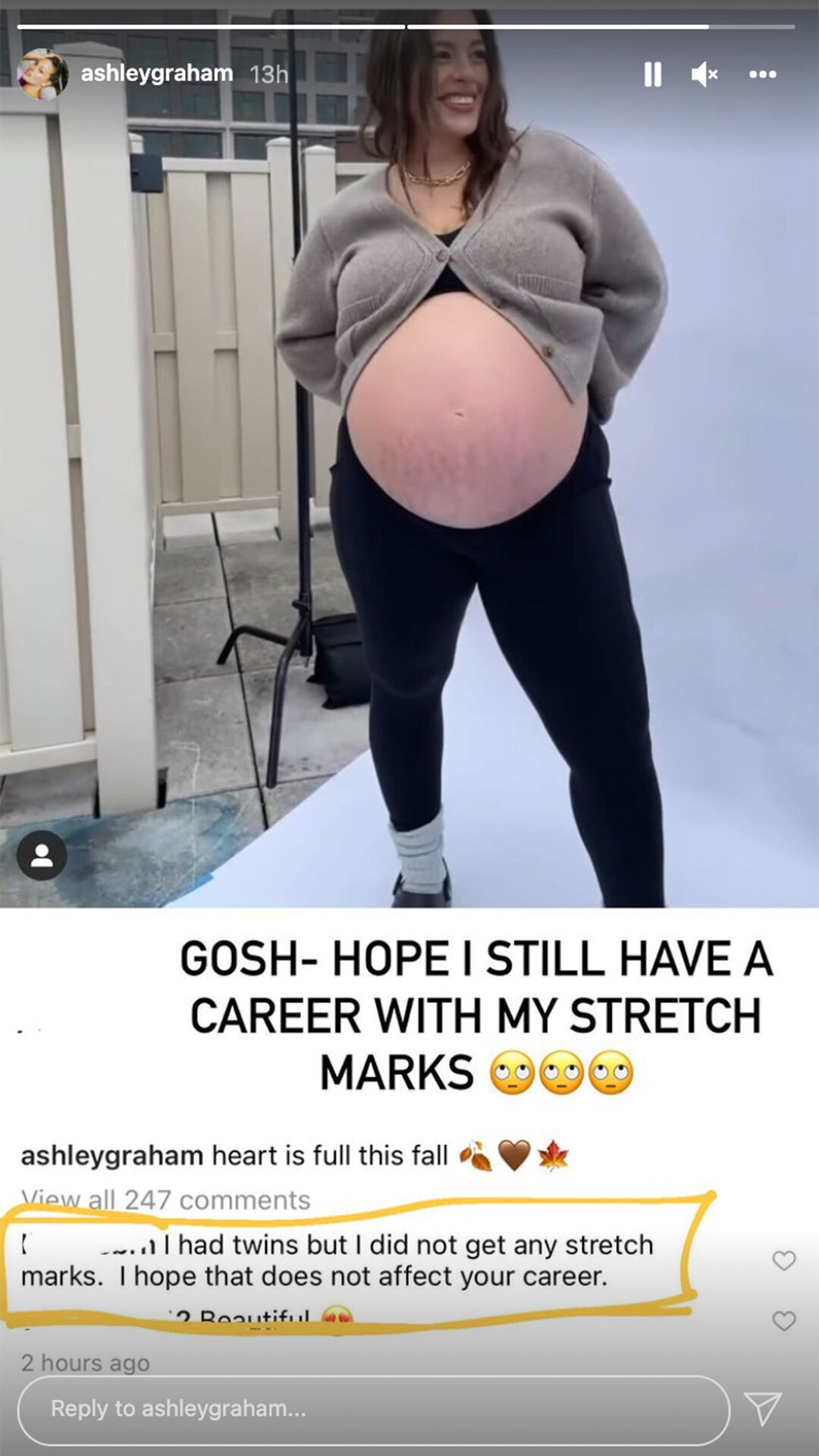 In July, Ashely and Justin announced that they're expecting a year-and-a-half after they welcomed their first child, 22-months-old Isaac Menelik Giovanni. "The past year has been full of tiny surprises, big griefs, familiar beginnings and new stories," the "Pretty Big Deal" podcast host wrote at that time. "I'm just beginning to process and celebrate what this next chapter means for us."

Since sharing the pregnancy news, Ashley has not been shy about posting photos of her bare baby bump to social media. In October, she went totally nude as she showed her stomach in a mirror selfie posted on her Instagram Story, wearing only some jewelry and a high ponytail.

Ashley previously shared that her first pregnancy taught her that control "just gets thrown out the window" when expecting. " I learned that the hard way when I tried to control everything when I was pregnant with Isaac and I told myself that I was going to bounce right back, because I was breastfeeding and everybody told me, 'Oh, if you breastfeed you're going to lose all the weight,' " she said.

"I had a few honest women tell me, 'You will never feel the same.' So they were just blunt with me and sure enough, I haven't felt the same," Ashley continued. "And then boom. I was like, 'Well, I just got pregnant again so maybe I'll never feel the same and I don't even know what I felt like before I was pregnant with Isaac anyways,' " she added.

B. Simone Goes Almost Bald to Support Her Sister Who Suffers From Topical Steroid Withdrawal

Ashley Graham Shares Her Wrong Perception of Her Twins

Ashley Graham Claims She Deletes Instagram After Giving Birth to Her Twins, Says It's 'Liberating'