As the report of the 'Pump It Up' rapper's sexuality spreads on social media, 'The Big Big Beat' raptress claims that her rival breaks the news just to 'spite' her.

AceShowbiz - Azealia Banks has reacted to news that reported Joe Budden came out as bisexual. "The Big Big Beat" raptress said that the "Pump It Up" rapper was "munching bird'' in a social media post, claiming that she's been warning people for years.

As the report of Joe's sexuality has been spreading on social media, the 30-year-old raptress reacted to his announcement and tried to force him back "into the closet," claiming that he simply broke the news to "spite" her. "Joe Budden only came out two months earlier than 2022 to try and spite me," she claimed in an Instagram Story.

A few minutes later, Azealia shared a separate post that read, "I TOLD Y'ALL JOE BUDDEN WAS MUNCHING BIRD." In a following Story, the "Anna Wintour" rapper wrote, "PROSTATE JOE." 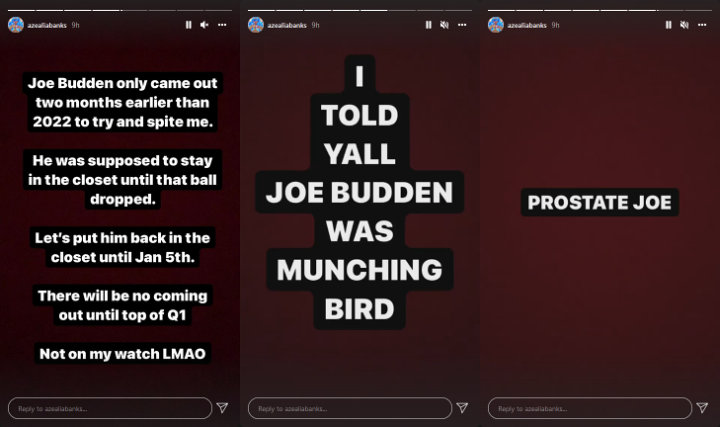 Over the years, Azealia and Joe have had a rocky relationship. Before celebrating the podcaster and saying that he "saved" her back in 2018, Azealia was at odds with Joe for his comments about Nicki Minaj.

Azealia has also made many comments about Joe supposedly not being comfortable with his sexuality, which is something that he has rarely addressed. On Thursday, November 4, he seemingly revealed the truth by informing listeners of his podcast that he likes men and women, coming out as bisexual.

Joe Budden asked his followers to spread his coming out news.

Azealia Banks Rants Against Lady GaGa, Accuses the Singer of Asking Her to Beef With Nicki Minaj