Seth Rogen also playfully criticizes Emmys organizers who previously claimed that the event would be held in 'a fully air-conditioned tent (that) will allow for more socially-distanced audience seating.'

AceShowbiz - Celebrities flocked at the Microsoft Theater in Los Angeles for the 2021 Emmy Awards. Taking place on Sunday, September 19, the award-giving event was held with caution due to recent surges of COVID-19. However, fans on social media noticed that some of the attendees didn't have their masks on.

Twitter users didn't take long before criticizing stars who didn't use facial protection while they were inside a small room. "No Masks at the #Emmys because rules are for the little people," one person sarcastically tweeted alongside a picture of Sterling K. Brown and Mandy Moore among those who didn't wear their masks at the event. 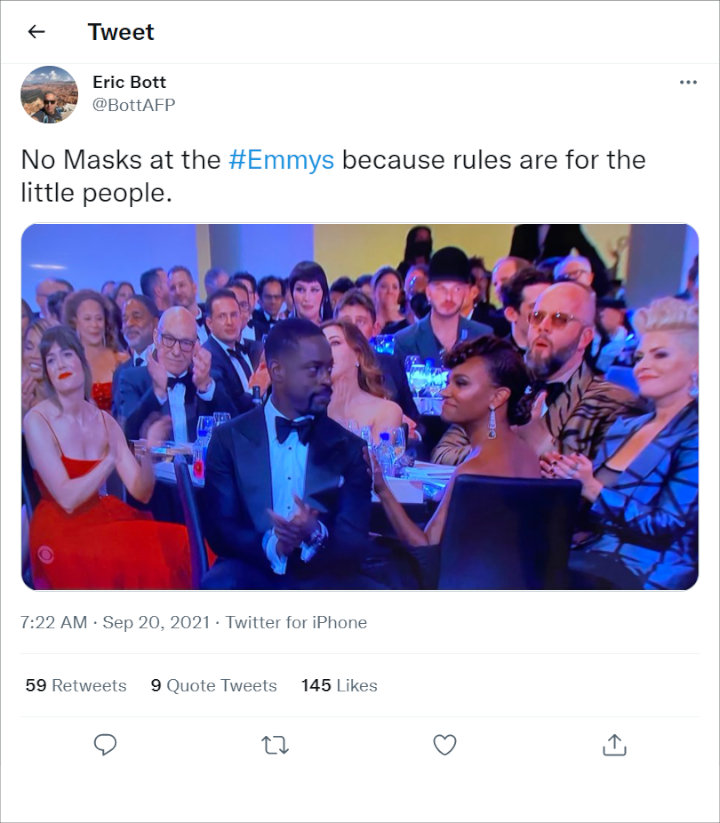 "No masks being worn INSIDE at The Emmys. Call me not shocked, love to preach but not practice what they preach…," someone else noted. Another person added, "Help the no masks at emmys is making me nervous theres so many people."

That night, Seth Rogen also criticized Emmys organizers who previously claimed that the event would be held in "a fully air-conditioned tent (that) will allow for more socially-distanced audience seating." He playfully said while presenting Emmy Award for Supporting Actress in a Comedy, "Why is there a roof? It's more important that we have three chandeliers than that we make sure we don't kill Eugene Levy tonight."

"That is what has been decided," he continued, clearly disagreeing with the Emmy structure. "This is insane. I went from wiping my groceries to having Paul Bettany sneeze in my face."

In response to that, awards show DJ Reggie Watts explained before going to commercial break that "despite what Seth might have said, we're going to celebrate and party, but while we're doing that we're absolutely following all the health and safety guidelines that some really smart people asked us to do to keep us safe from COVID."

Host Cedric the Entertainer also revealed that everyone had to be vaxxed before coming to the 73rd Primetime Emmy Awards. "I got vaxxed. I did not have a reaction like Nicki Minaj's cousin’s friend. I got Pfizer because I'm bougie. Pfizer, that's the Neiman Marcus of vaccines, Moderna, that's Macy's. Johnson & Johnson, that's TJ Maxx," he went on to joke.