Megan Fox is caught in the fight that breaks between her singer boyfriend and the mixed martial artist as the 'Teenage Mutant Ninja Turtles' actress and security try to pull the two guys apart.

AceShowbiz - Conor McGregor seemed to be eager to be back for a fight after undergoing a surgery for his injured leg. The UFC champion got into an altercation with Machine Gun Kelly while attending the 2021 MTV Video Music Awards.

The fight broke out on the red carpet at Brooklyn's Barclays Center in Brooklyn, New York City, where the star-studded event took place on Sunday, September 12. According to reports, Conor threw his drink at MGK.

In photos obtained by Page Six, security was seen trying to pull the two guys apart as the former UFC champion tried to throw a punch at the rapper. Megan Fox was caught in the middle as she appeared to calm down her singer boyfriend.

"They scuffled then it settled down and Conor went for him again," a source told the site, adding that the photographers "weren't happy" and were "saying they were going to boycott Conor because they were worried MGK and Megan wouldn't walk."

Another source dished that security had to get involved and "everyone was screaming." The second source added, "[Conor] was ready to throw fists. Security was having trouble holding him back." 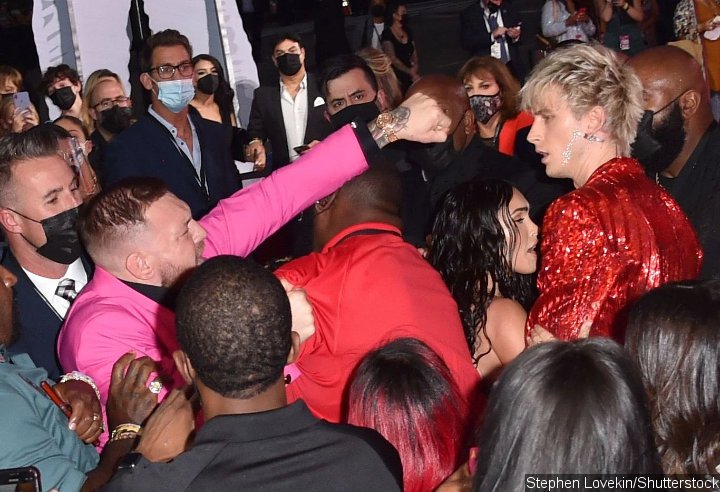 Conor McGregor and Machine Gun Kelly got into a scuffle at 2021 MTV VMAs.

Conor's rep denied that the fight happened, despite photos capturing the brawl. "Conor only fights fighters," the rep said in a statement to the news outlet. Meanwhile, Kelly's rep has not responded to a request for comment on the incident.

It wasn't immediately clear what caused the fight, but sources told TMZ that Conor approached MGK to ask for a photo, which the "Bloody Valentine" spitter denied. Things reportedly got heated as MGK pushed Conor, who stumbled back and spilled his drink.

When he collected himself and whatever was left of his drink, Conor allegedly spilled the drink on MGK as well as Megan, who was nearby. The two guys were separated before things got really ugly as the Irish boxer tried, but failed to lay a finger on his opponent.

Meanwhile, a source close to Conor shared a slightly different version of the story. According to the source, the fighter wanted to say hello to MGK, so he stuck his hand out and walked straight up to the singer. The hip-hop star reportedly said something which Conor couldn't hear and MGK's security pushed Conor away. Conor was reportedly surprised by how he was treated as he wasn't unsure what the issue was.

Nadine Coyle Hopeful to Get a Visit From Sarah Harding's Spirit

Nicki Minaj Bares All in Racy Photos on Her 39th Birthday

Actor Kaalan Walker Accused of Raping Over 30 Women Including Minor

Kyrie Irving May Take COVID Vaccine Under This Condition