The third and youngest son of David and Victoria Beckham looks smitten as he exchanges gaze with his brunette companion during a romantic stroll at Reading Festival.

AceShowbiz - Cruz Beckham is young and in love. The 16-year-old son of David Beckham and his wife Victoria Adams has sparked dating speculation as he was spotted holding hands with a mystery brunette at Reading Festival.

The teen looked smitten as he exchanged stare with his girlfriend while taking a romantic stroll at the festival on Sunday, August 29. He and his yet-to-be-identified girlfriend flashed a smile before keeping their heads down, seemingly after realizing that paparazzi recognized him and took their pictures.

For the weekend outing, Cruz looked effortlessly fashionable in an oversized retro red-and-blue panelled windbreaker teamed with a pair of navy trousers featuring white crisscrosses. He had a black leather bag slung over his torso and also wore a pair of of red-soled trainers, as he accessorized with several rings. 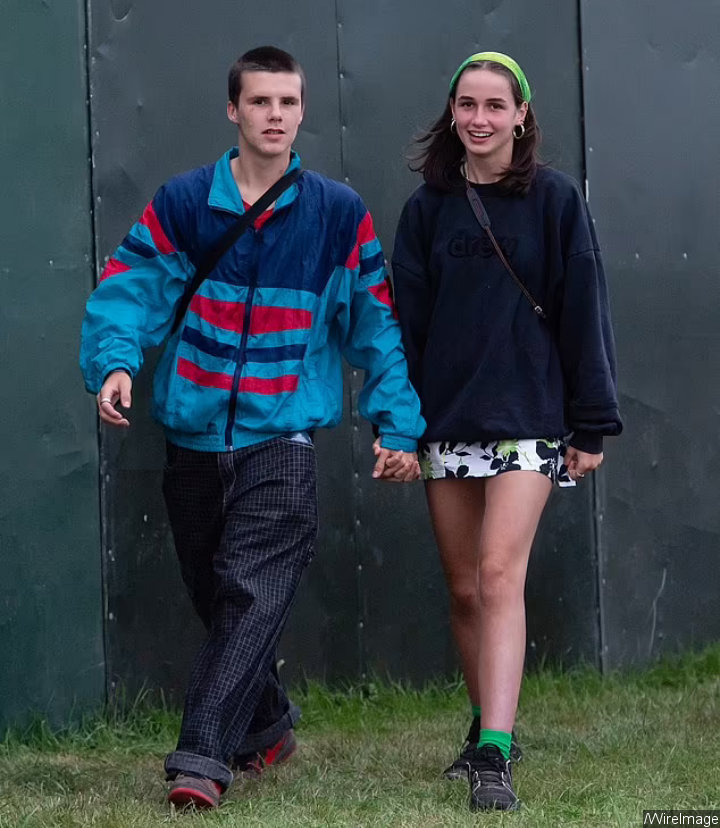 As for his lady love, she looked casually chic in an oversized navy sweatshirt, which she paired with a white floral mini-skirt. Her shoulder-length hair was kept ruly under a green bandana as she also sported a pair of black leather trainers, complete with lawn green socks. She additionally carried a brown leather bag which was slung over her shoulder.

This marks Cruz's first public relationship after his older brothers have been put under the spotlight due to their own romances. Brooklyn Beckham is now engaged to actress Nicola Peltz after having dated a string of famous beauties, including Chloe Moretz, Sonia Ben Ammar, Sophia Richie and Madison Beer just to name a few. Romeo Cruz, meanwhile, is currently in a relationship with model Mia Regan.

His public outing with his girlfriend arrives after his parents congratulated him on his GCSE results earlier in the month. Posting a snuggly picture of him and third and youngest son, the former soccer star wrote on his Instagram Story earlier this month, "Cruzie so proud well done big boy."

Victoria, meanwhile, shared a photo of her son going for a swim and wrote along with it, "Well done @cruzbeckham on your amazing school results! We are all so proud of you!!"

David and Victoria are also parents to a 10-year-old daughter named Harper.

Diddy Doesn't Approve if His Teen Twin Daughters Are Dating: 'They Better Not'