Zendaya and Tom Holland Attend Wedding Together as a Couple

In one photo from their friend's wedding in Simi Valley, California, the 'Spider-Man: Homecoming' stars are seen cozying up to each other as the actress leans her head against her rumored boyfriend's temple.

AceShowbiz - Zendaya Coleman and Tom Holland are still in love and remain strong two months after they sealed their romance with a kiss. In photos surfacing online, the "Spider-Man: Homecoming" stars could be seen cozying up to each other while attending a wedding together as a couple.

"The Greatest Showman" actress and the "Cherry" leading man attended their friend Josh Florez's wedding on Sunday, August 22 in Simi Valley, California. In a pic shared by fellow attendee Esteban Camarillo on his Instagram Story, the actors were spotted looking cozy.

Zendaya leaned her head against Tom's temple as they smiled with three friends surrounding them. Though they were not holding hands, the 25-year-old actor appeared to be holding onto the sleeve of his rumored girlfriend's dress. 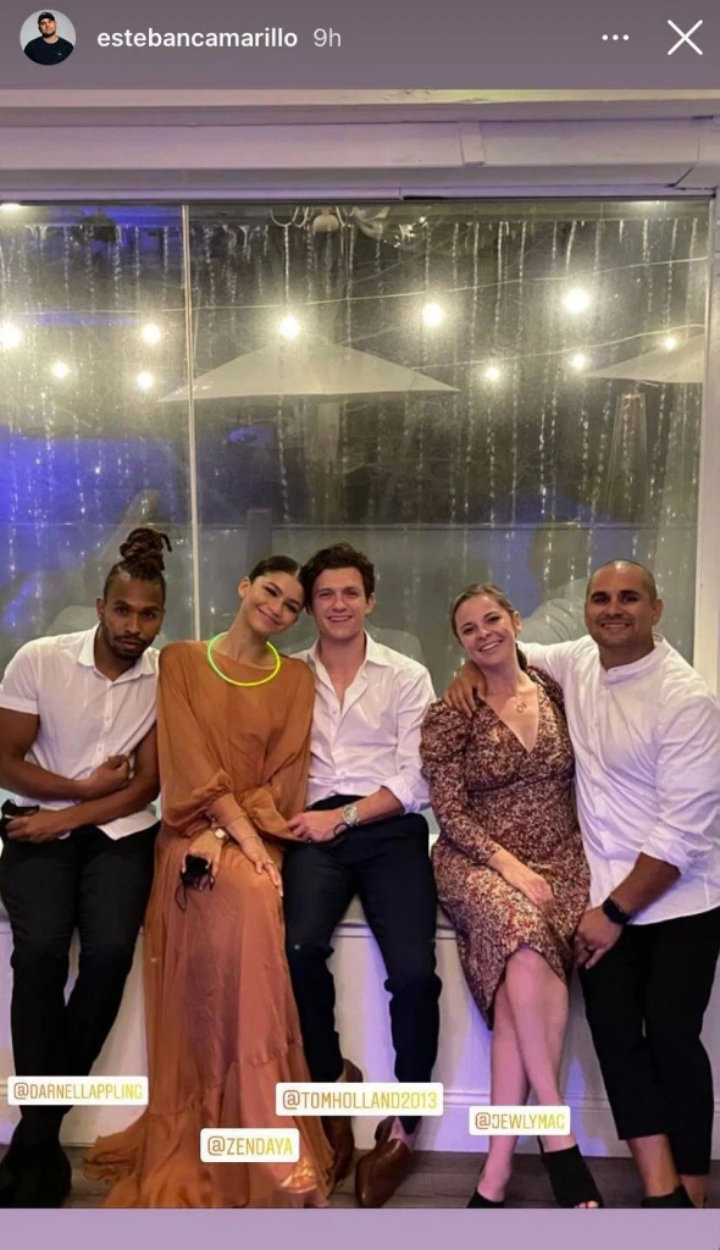 Zendaya and Tom Holland cozied up to each other at a friend's wedding.

Videos from the reception, uploaded by a fan account on Instagram, showed the twosome clapping and dancing in their chairs as the bride and groom took the dance floor. The same fan account also shared another photo of the Hollywood stars. In it, Zendaya was photographed putting her arm around Tom as they smiled at the camera.

For the special occasion, Zendaya looked elegant in her long tan dress. The 24-year-old actress also sported a glow necklace. In the meantime, Tom could be seen wearing a white button-down shirt under a black suit and black trousers, teamed with brown shoes.

Tom and Zendaya were first linked romantically after filming 2017's "Spider-Man: Homecoming". At the time, a source told PEOPLE, "They started seeing each other while they were filming 'Spider-Man'. They've been super careful to keep it private and out of the public eye but they've gone on vacations with each other and try and spend as much time as possible with one another." They, however, always denied they're an item as they went on dating other people.

Fast forward to July this year, Zendaya and Tom were spotted locking lips in his car during a Los Angeles outing. In some photos, the English native could be seen tenderly holding his rumored girlfriend's face as they leaned in for a smooch. Several days later, the alleged couple was caught having dinner together at a Thai restaurant near Universal Studios in Los Angeles.