After the awkward silence during the 'Hart to Heart' show goes viral on social media, the 'Space Jam: A New Legacy' actor says that it was his 'favorite interview ever.'

AceShowbiz - Don Cheadle has had an awkward exchange with Kevin Hart during an interview on Peacock's show "Hart to Heart". After the "Jumanji: The Next Level" actor's reaction toward the "Space Jam: A New Legacy" actor's statement went viral, a representative for the latter has clarified that it was all a setup.

The representative for Don told TMZ that "the whole thing was just a joke." The spokesperson also told the publication that the James Rhodes depicter in "Avengers: Endgame" and Kevin "were on it together."

After the exchange went viral, Don himself addressed the awkward exchange on his Twitter account. He wrote, "That @KevinHart4real and i need to do a movie together asap! i think this is my favorite interview ever. 'Damn!' " 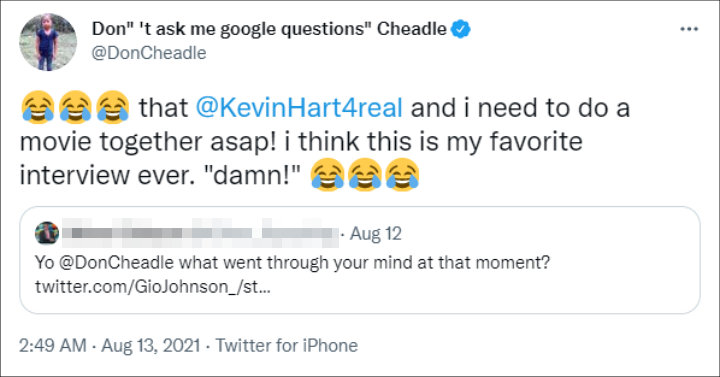 Don Cheadle addressed the awkward exchange with Kevin Hart in an episode of 'Hart to Heart'.
Editors' Pick

In a short clip of the show that has been viewed over 2 million times on Twitter, Don discussed generational wealth. "We're very fortunate, obviously, to be able to create these opportunities for ourselves and for our kids and be in a position for the first time in my family, and probably in your family, to have a shot at whatever this generational wealth thing means," he said.

"And me, you know," Don continued, "I'm 56 years old," at which point Kevin exclaimed, "Damn!" The two then had an awkward silence. The "Fatherhood" actor went on to say, "I'm sorry. I'm sorry. It was a thought and I blurted it out. I did not mean it that way."

Don insisted, "I'm fine." Kevin then replied, "Ok. Just understand I didn't mean it the way it came out. That was from a place of love. Like, 'Damn.' " Don, however, denied, "If we could play it back right now -- those are two different 'Damns.' We'll take a poll on how you meant it."

The show's host went on trying to keep the joke going, asking Don, "Can you see without your glasses?" Hitting back, the "No Sudden Move" actor added, "These aren't real, Kevin. I put these on to appear smart. You might need some of these to appear smart."