Making an appearance at the Radford Motors gathering at the Lyon Air Museum in Santa Ana, California, the 'Bridget Jones's Baby' actress and her beau look elegant in matching black outfits.

AceShowbiz - Renee Zellweger and Ant Anstead have taken their relationship to the next level. During the Radford Motors gathering in Santa Ana, California, the new couple was spotted enjoying each other's company as they attended their first public event together as a couple.

On Saturday, August 7, Ant was accompanied by his Oscar-winning lady love to a gala event held by Radford Motors at the Lyon Air Museum. Offering a glimpse at the event, the "Wheeler Dealers" alum shared some photos on his Instagram Stories. In the snaps, the lovebirds were all smiles as they posed with their friends including "The Real Housewives of Orange County" alum Lydia McLaughlin and her husband Doug.

For the night outing, Renee looked elegant in a flowy black gown that she paired with matching pumps. In the meantime, the "Ant Anstead Master Mechanic" star sported a dapper black-and-white tuxedo. 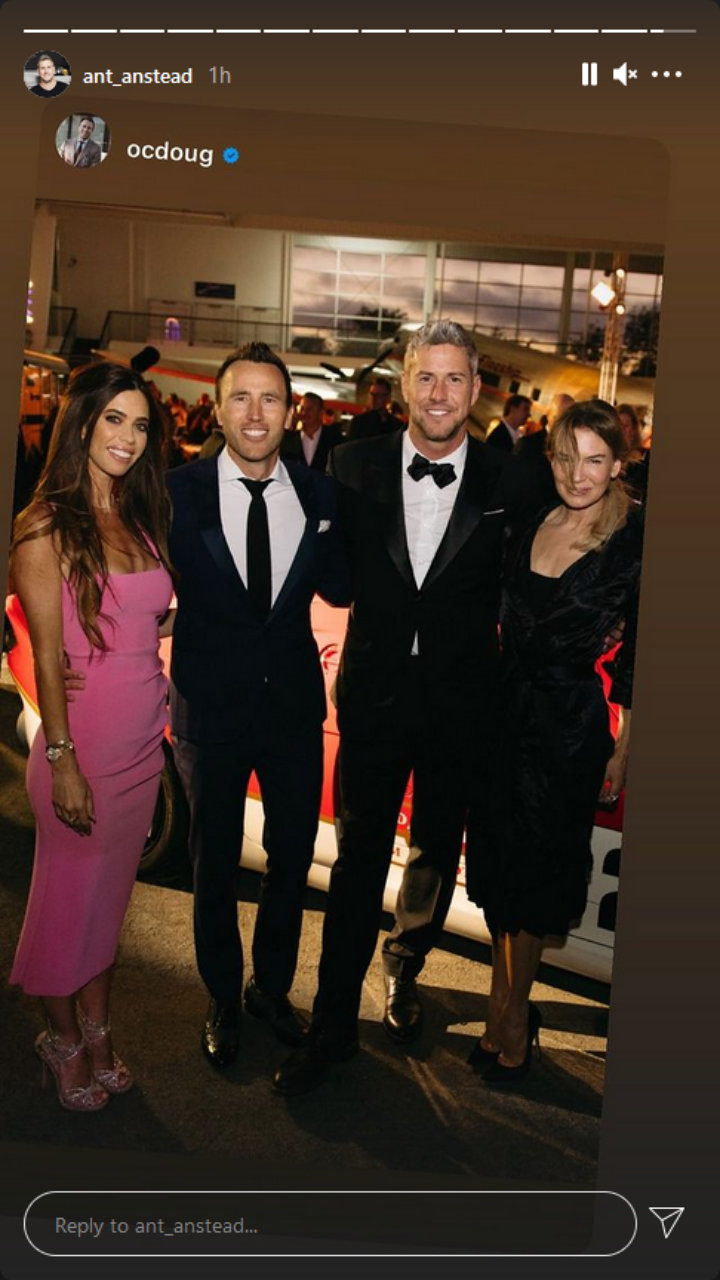 Of their relationship, it seemed like things were getting serious between the two. Back in late July, Renee was reportedly "moving things" into Ant's home because she already felt "safe" with him. At the time, a source spilled to Us Weekly, "Renee is already moving things into Ant's house. He adores her and makes her feel safe."

"Renee has met his youngest and [he] loves her too," the source offered more details. "Renee is so great with kids and it warms Ant's heart to see her be so good with [him]."

Renee and Ant sparked romance rumors in late June, just days after he finalized his divorce from Christina Haack (Christina El Moussa). The "Bridget Jones's Baby" actress met the car expert while filming an episode of his upcoming Discovery+ series "Celebrity IOU Joyride". Since then, the twosome was spotted spending time together and even caught sharing some kisses.

Weighing in on the budding relationship was Ant's close pal and "Wheeler Dealers" co-star Mike Brewer. "I think Renee has found her Prince Charming and Ant has found a real woman in Renee," he claimed. "He's got a woman who cares about him, and he cares about her. They are both wonderful people and they deserve this happiness."

"They just clicked, and the timing was right. They wanted to keep it private at first. When you're in a new relationship, you don't know if it will work or not so you're not sure if you should tell your friends or share it with your family," Mike explained. "But Renee is comfortable now with them being seen together, shopping at Home Depot (U.S. home supply store) or just doing the ordinary things other couples do."

Dwayne Johnson Declares He's the 'Opposite' of 'Not Washing Themselves' Celebs