Meanwhile, the 'My Way' rapper's ex and baby mama Turquoise Miami asks people to 'be a little bit more compassionate' to the grieving father during this hard time.

AceShowbiz - Fetty Wap has broken his silence after it's disclosed that he had just lost his 4-year-old daughter Lauren Maxwell. Taking to Instagram Live, the rapper emotionally addressed the passing of his little girl.

"She's good. My baby's happy now," he said while going live on Tuesday, August 3. Calling his daughter "my shorty" and "twin," he showed a picture of his late daughter before kissing it. "That's my little twin right there," he said.

The 30-year-old then asked his fans to post butterflies because Lauren "loved butterflies." He pleaded with the audience, "If y'all could do me a favor. Just post all butterflies on my s**tt," adding, "She sweared she was a mermaid."

During the live session, Fetty appeared to choke up as he wiped his eyes with his hands several times. "Man, thank y'all," the "Trap Queen" hitmaker told his followers. "That's love. I appreciate ya'll, for real. Damn. That's love. She'd be happy as hell."

Fetty also posted a tribute to his daughter on his feeds. Sharing a photo of the little girl, he wrote in the caption, "Hey mini me (My Twin) [a heart emoji] [a butterfly emoji] …. I love you to the moon and back forever and ever bestfriend."

Meanwhile, Lauren's mom Turquoise Miami has asked people to show compassion to the grieving father. "The old videos of me complaining about wap are from 2017-2019. Our co parenting had improved off the gram, and we came to a better place for Lauren," she wrote on her Stories on Tuesday, addressing her past rift with Fetty.

She went on defending her ex, "He became more financially and emotionally responsible for her. He didn't post her the same way I didnt, because Lauren use to get a lot of disrespectful things said about her and I asked him not to."

"All that y'all need to know is Lauren loved her daddy and he loved her," she clarified Fetty's relationship with his daughter. "She made him laugh with her crazy funny personality and she loved to be the center of attention and he loved to be her audience. It couldn't hurt some of y'all to be a little bit more compassionate, you don't have to kick a man while he's down. Losing a child is as down as it gets." 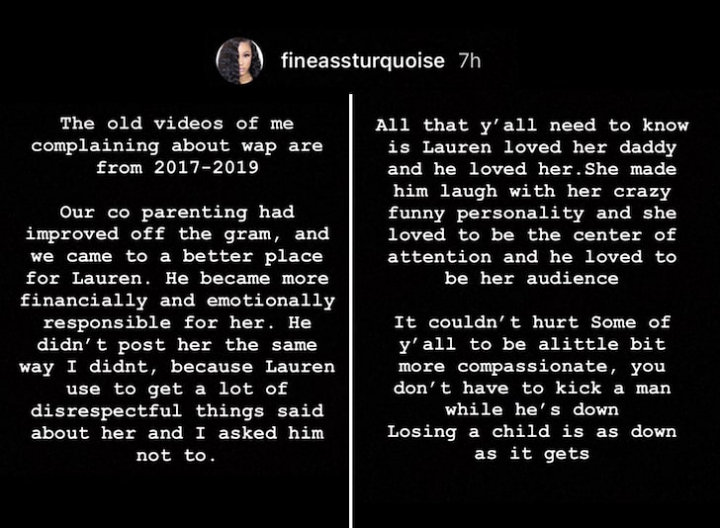 Turquoise first announced Lauren's passing on July 31. "This is my amazing, beautiful, funny, vibrant, loving, talented, smart and hardheaded princess mermaid Aquarius," she captioned a video of Lauren on Instagram. "If you see this post scrolling by with her comment or just say to yourself 'I love you LAUREN' because they say that souls can feel your love. #rip."

Fetty seemed to hint at the loss as he dedicated his performance at the Rolling Loud festival in Miami on July 25 to Lauren. "LoLo daddy did that s***for you last night baby girl," he wrote on his Instagram Story after the gig.

Unconfirmed reports claim that Lauren passed away in June. A cause of death has not been made public.

Fetty is also a father to five other children with four different women.