The retired artistic gymnast also reveals that Larry lied to her former coach about her X-Ray, leading her to compete at the 2012 London Olympics with a broken foot.

AceShowbiz - McKayla Maroney revealed that she had "suppressed" Larry Nassar's sexual abuse for so long. On the reason why, the retired artistic gymnast divulged that she was told to "shut the f**k up" when she was trying to talk about it to her former teammate.

The 25-year-old got candid about her unpleasant experience via Twitter on Sunday, August 1. "So, @USAGym and USOC aka @TeamUSA. When I was under 'your care' in Tokyo competing for Team USA at 15, and my parents weren't allowed to stay in my hotel, or see me in person... When I was all alone, naked, with Larry Nassar on top of me for 50min balling. Who's fault is that?" she first spilled.

"@USAGym @TeamUSA Why did I have to walk the hallways of the hotel you booked me at 2am alone, and get locked out of my room because my roomate Sabrina was asleep," she further stressed. "I then told my teammates what happened the next day after practice with John Geddart in the car, and got yelled yet."

"I was told to 'Shut the f**k up, and don't ever say anything like that about Larry Nassar again' by an older teammate I looked up to," the gold medalist went on detailing. "That scared the hell out of me, so I listened, and didn't say anything for a long time. I just suppressed it until it came up again in 2015." 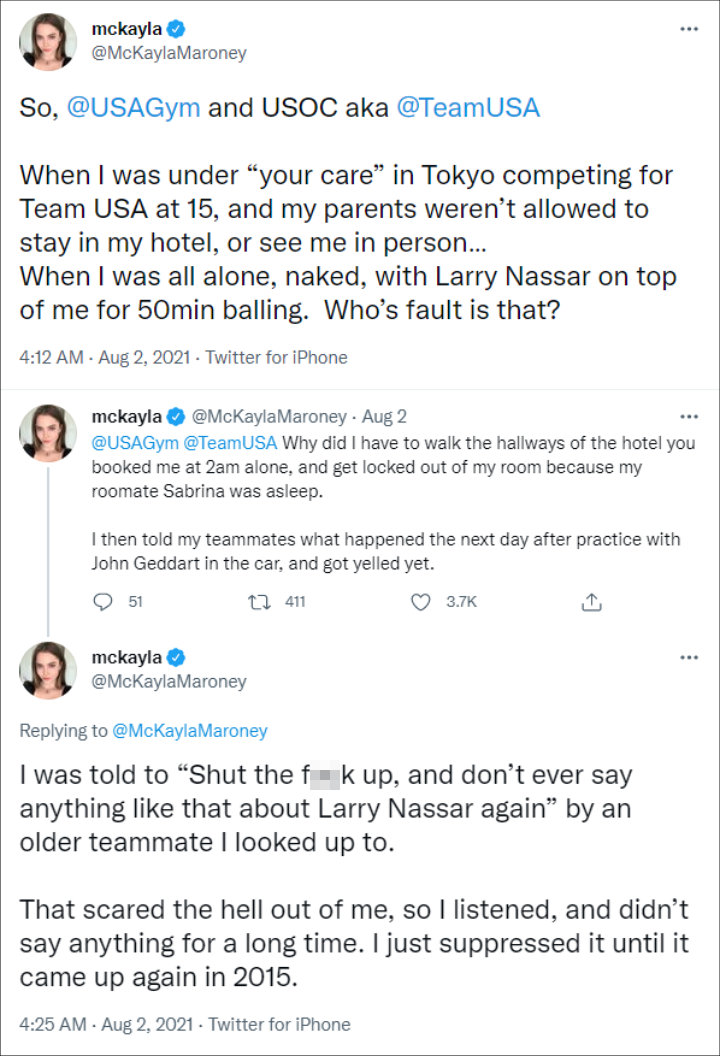 McKayla Maroney revealed why she had suppressed Larry Nassar's sexual abuse for a long time.

Meanwhile on Instagram Story, McKayla disclosed that she was competing at the London 2012 Olympic Games with a broken foot. Noting that she was not forced to do so, the athlete claimed the convicted sex offender knew about it but decided to hide it from the team's coach.

"Just want to be clear that I was NOT forced to compete on my broken foot," she then clarified on Twitter. "I broke my foot the first day I arrived to London then Larry Nassar lied to Marta Karolyi about the X-Ray stating it was an 'old break' to keep me ON the team." 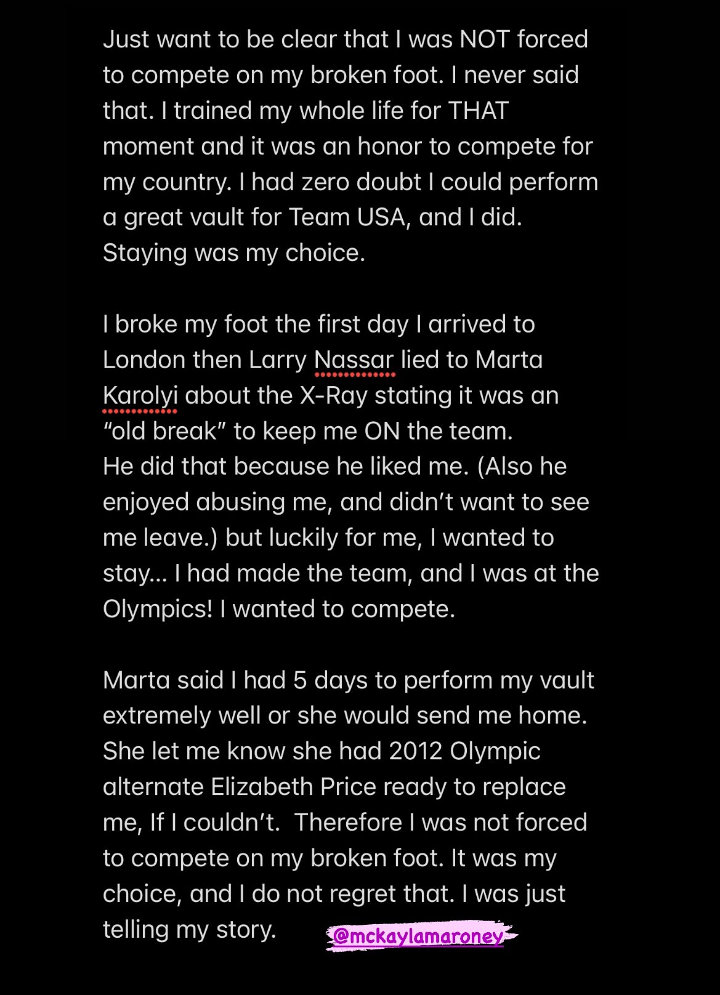 McKayla Maroney divulged she once competed at the Olympics with a broken foot.

"He did that because he liked me. (Also he enjoyed abusing me, and didn't want to see me leave.) but luckily for me, I wanted to stay," McKayla emphasized. "I had made the team, and I was at the Olympics! I wanted to compete."

The Weeknd Weighs In on 2021 Grammys Snub: I'll Never Be in That Conversation Ever Again