The 'Real Housewives of Beverly Hills' star, who eventually gets into a Twitter feud with the hater, calls out the critic for changing her/his photo after mocking his son and calling her 'b***h.'

AceShowbiz - Erika Jayne will not let anyone say negative things about her policeman son. Having learned that an online troll called Tommy Zizzo "p***y," "The Real Housewives of Beverly Hills" star was quick to jump to his defense.

On Sunday, July 25, Bravo dropped a never-before-seen clip from "RHOBH" in which Zizzo gave his mom advice amid her divorce battle with Tom Girardi. The critic in question then responded to the clip by writing, "I will cry laughing if @erikajayne p***y son has to put the cuffs on this b***h. Karma at it's [sic] finest."

Upon seeing the tweet, Jayne was quick to fire back, "Imagine a 'prosecutor' calling a police officer a p***y on Twitter... You think I don't see you @LuckyG90210." The individual then shot back, "EJ, your helping me. I never said I was a prosecutor. With you - wet dream b***h. I know where I will be in 5 yrs, will you?" 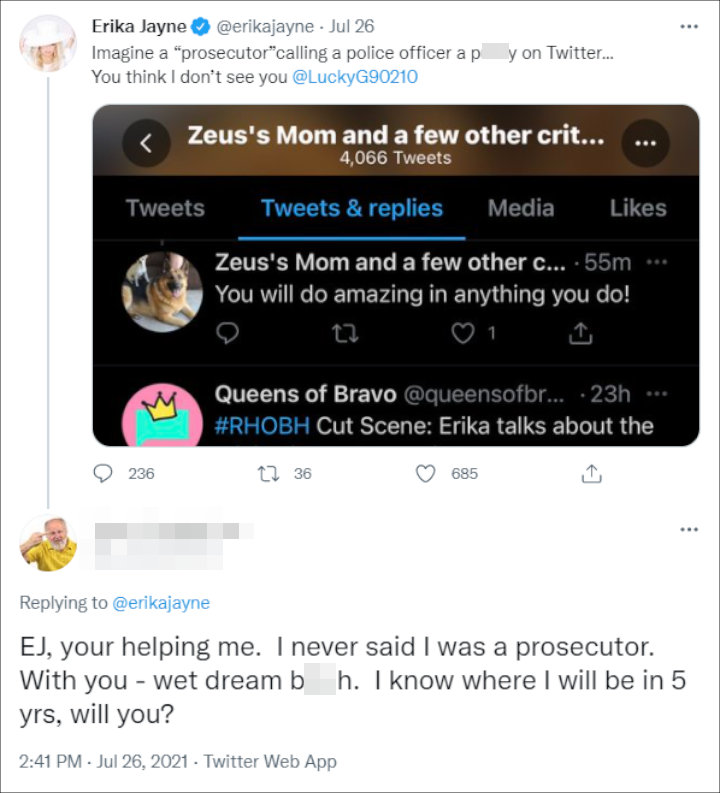 Erika Jayne got into a Twitter feud with a troll mocking her policeman son, Tommy Zizzo.

The "Dancing with the Stars" alum then penned in a separate post, "Can all the 'lawyers' on here commenting please do something productive like bill your clients? This reality TV s**t it beneath you. Thanks." The hater later replied, "I would work pro bono just to f**k you."

"You wanna f**k? Ewwww," Jayne retaliated, to which the person fought back, "Nice try smart a**. You know exactly what the f**k I am talking about. It would be a pleasure to help prosecute you b***h." After sending a few spat back and forth, the troll changed his/her name and photo on Twitter.

Calling out the hater for the last time, Jayne urged, "Stop hiding behind your dog you b***h." She further fumed, "Call my son , a policeman, a p***y again and see how well you do." 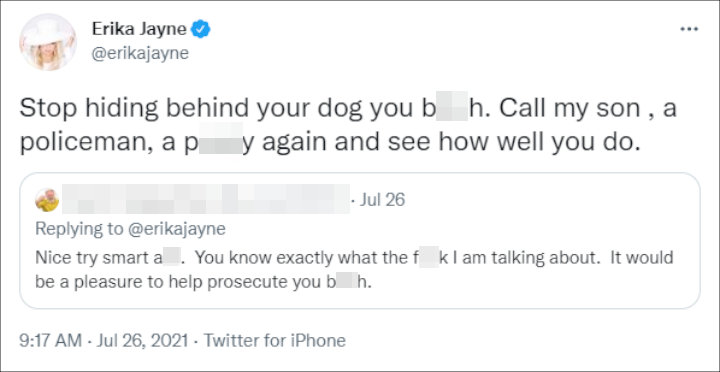 Erika Jayne slammed the hater for changing her/his name and photo on Twitter following their feud.

Despite the heated exchange, many fans showed their outpouring support for Jayne. "Ugh I'm so sorry…your feelings are definitely valid with this. Attacking someone's family is NEVER okay under any circumstances," one user noted, with another adding, "I find it hard to believe anyone who is a prosecuter to be not only so inappropriate on social... but just evil and disrespectful. BE A BETTER HUMAN DAMNIT."

Jayne shares 27-year-old Zizzo with her former husband Thomas Zizzo, whom she was married to from 1991 to 1996. The singer, meanwhile, has no kids with Girardi, with whom she split in November 2020 after 21 years of marriage.