When online trolls voice their disapproval over her big spending, the 'WAP' hitmaker takes aim at the wives of Virgin boss Richard Branson and Amazon founder Jeff Bezos.

AceShowbiz - Rapper Cardi B has fired back at online trolls after she was heavily criticized for showing off her pricey collection of designer handbags.

The "WAP" hitmaker gave her Instagram followers a sneak peek at her ever-growing range of Hermes Birkin bags earlier this week (beginning July 19), with one shot featuring the pregnant star choosing from a colorful array of the accessories, which had all been laid out on the floor.

However, some followers were not impressed with Cardi's big spending, suggesting she could have put her money to better use.

"You never see Oprah [Winfrey], Melinda Gates, or Mark Zuckerberg's wife doing this, and they're BILLIONaires... but carry on [sic]...," commented one critic, as another wrote, "That's over 2 million in purses let that sink in."

The negative remarks caught Cardi's attention and she wasted no time in defending her designer splurge. "Girl Oprah take[s] trips that cost ten of these bags....," she hit back.

Cardi then took aim at business moguls like Virgin boss Richard Branson and Amazon founder Jeff Bezos as she continued, "Don't compare me to white billionaires' wife's when their husbands are taking billion-dollar trips to space just to be able to say they are the first ones who did it."

"An[d] billionaires that can end world hunger and are using their money to make diseases and vaccines to f**k up the populations," the "Bodak Yellow" hitmaker went on to add. 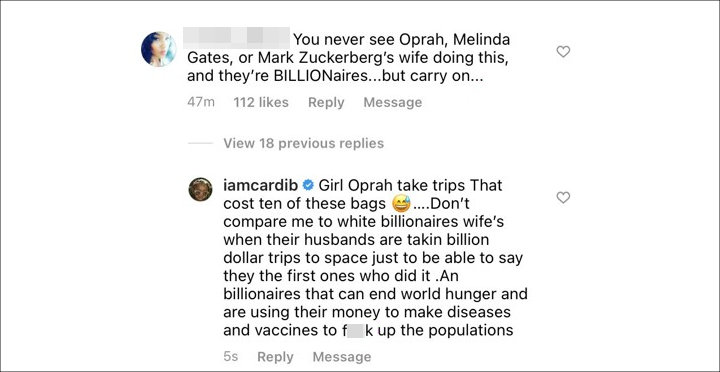 Cardi B blasted a hater.

Branson became the first billionaire to blast into space on his Virgin Galactic passenger jet on July 11, while Bezos fulfilled his childhood dream on Tuesday, July 20 on board the New Shepard spacecraft.