AceShowbiz - Nikki Bella and Brie Bella's brother has split from his wife. JJ Garcia, who has been married to Lauren "Lola" Garcia for more than 10 years, made use of his social media account to announce their separation.

On Tuesday, July 20, JJ shared a lengthy message on Instagram Story that was previously posted by Lauren on her own Instagram page. It read, "It's no secret that there's been a shift in our lives the past couple months and although it's been something I've been personally trying to navigate, I want to be as transparent as possible since I share so much of my life with you."

"There's no easy way to say it.. but JJ and I have decided to separate," the statement continued. "Going forward, I'm asking for privacy and respect on sharing additional information as there are the two of us involved as well as our children. Thank you for your support, kind words, and everything in-between you've already given me in this space."

JJ, who married Lauren in 2011, went on to add his own note, "I know Lauren posted this earlier but I wanted to share it on social as well!!!" He then expressed his gratitude to his fans by saying, "Thanks for your support." 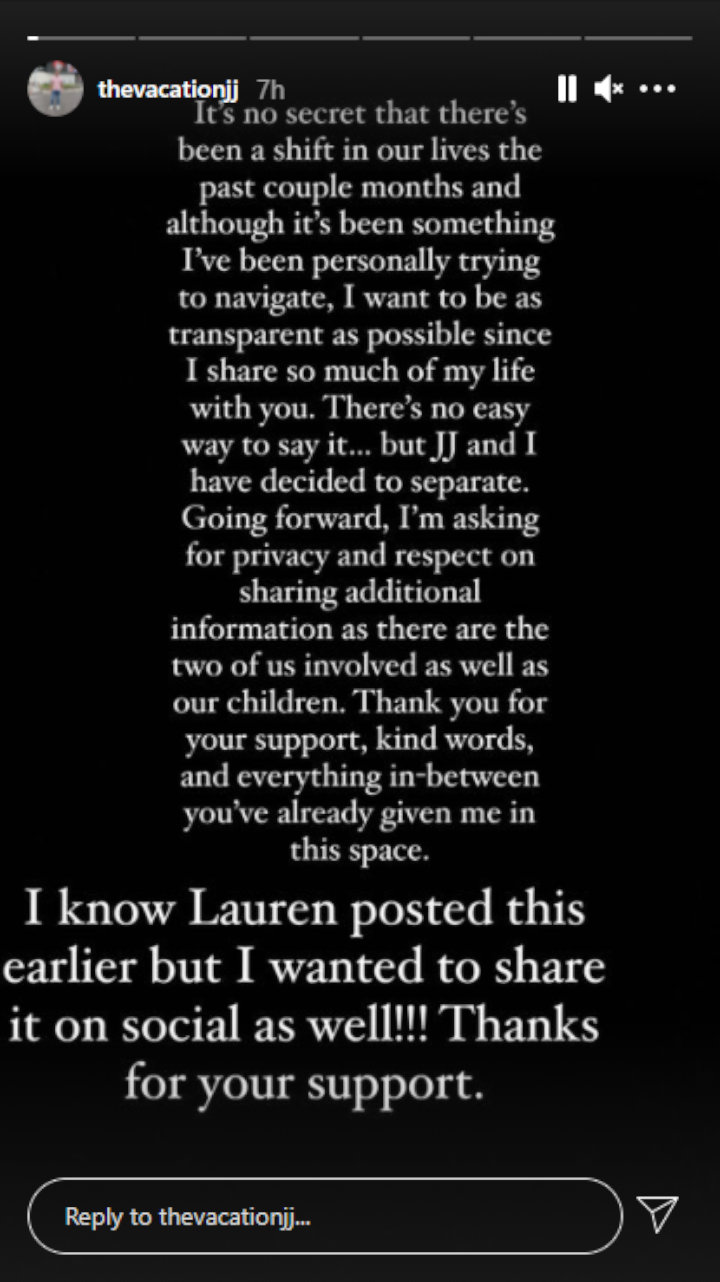 The shocking news came nearly three months after JJ and Lauren celebrated their 10th wedding anniversary. In April, he shared on Instagram several pictures of his now-estranged wife. In the accompanying message, he gushed, "I am so blessed to be able to call @whatlolalikes my wife for the last 10 years!"

"You are my best friend! From traveling Europe to having two amazing kids we have done so much but look forward to doing so much more with you by my side!" the father of two further raved. "I love you over the sun, under the moon, in and out of all the stars! Happy Anniversary."

During their marriage, JJ and Lauren welcomed two daughters. They are 4-year-old Vivienne James Garcia and 2-year-old Alice Jude Garcia.