The reality TV star says that her 'beautiful' newborn daughter Layla Capri Jones is 'the best birthday gift' she could have ever given to her husband T.J. Jones.

AceShowbiz - Theresa Jones is officially a third-time mother. "The Challenge" star announced that she had just given birth to her third child with husband T.J. Jones and she "couldn't be more grateful" for it.

On Tuesday, July 20, the 34-year-old mother shared the first picture of her new bundle of joy. "Welcome to the world our beautiful Layla Capri Jones!!" the reality TV star wrote in the caption. She continued, "Baby girl arrived last night on Daddy's Birthday making it the best birthday gift I could have ever given him!!! We are all doing awesome and couldn't be more grateful!!!"

"Happy Belated Birthday @iamtj_jones & Layla!!!! I LOVE YOU BOTH!!!!!" Theresa added. The mother of three then concluded her announcement post with her third child's birth date, "7.19.2021." Not stopping there, she also took to her Instagram Story to share a pic of her baby in the hospital, writing, "She made it [love] July 19, 2021." 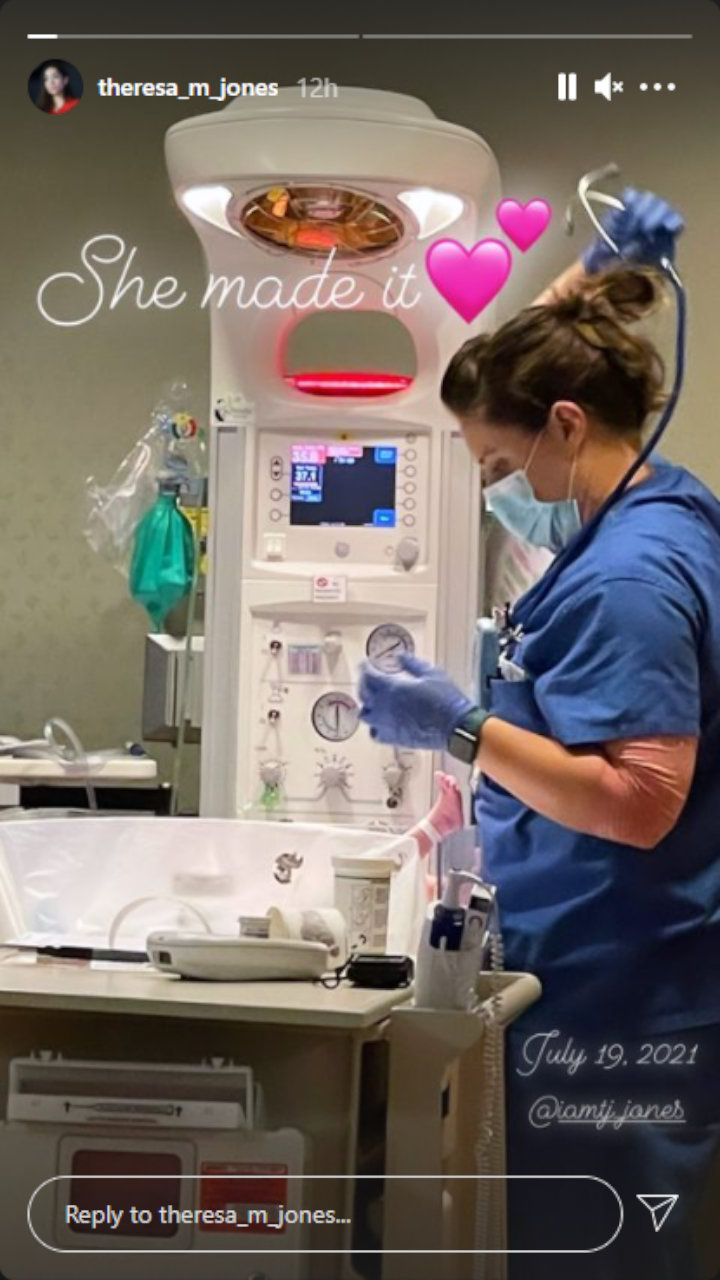 Theresa Jones announced her third child's arrival with a snap of the newborn in the hospital.

Theresa's husband T.J. himself posted on his Instagram page an adorable clip of his newborn daughter sleeping. Gushing over the little one, he penned in the caption, "What better gift than someone to share a birthday with?! Layla Capri Jones was born last night at 9:46 pm, just in time to make sure that I will never get another birthday to myself!"

"Wouldnt have it any other way though," T.J. stated, before praising his wife, "@theresa_m_jones you deserve all the praise for blessing us with this beautiful baby girl." The New York Giants athlete then concluded his post with hashtags that read, "#3Under30 #WeAreOutnumbered #MuchNeededManCave #BirthdayTwins #TryingToWakeHerUp #SleepingLikeHerDaddy."

Theresa and T.J., who are already parents to 5-year-old daughter Easton and 2-year-old son Maddox, first shared the news about their third child back in January with photos of their baby's sex reveal. At the time, they posted photos of themselves alongside their children as they shot pink confetti and powder out of mini canons, indicating they were expecting a baby girl.