For the beach outing, the 'Without Remorse' actor could be seen sporting a red, floral print shirt while the stepdaughter of Steve Harvey looks stunning in a purple patterned bikini.

AceShowbiz - Michael B. Jordan has nothing but love for his girlfriend Lori Harvey. During their romantic "baecation," the "Without Remorse" star sweetly kissed the stepdaughter of TV personality Steve Harvey.

On Sunday, July 4, the 24-year-old beauty took to her Instagram Story to share a glimpse at her romantic getaway with the "Black Panther" actor. Showing some PDA, she took a quick video of her and her boyfriend sharing a kiss as they enjoyed the view at the beach. For the outing, the Tennessee native was clad in a purple patterned bikini while the 34-year-old actor wore a red, floral print shirt that was mostly unbuttoned. 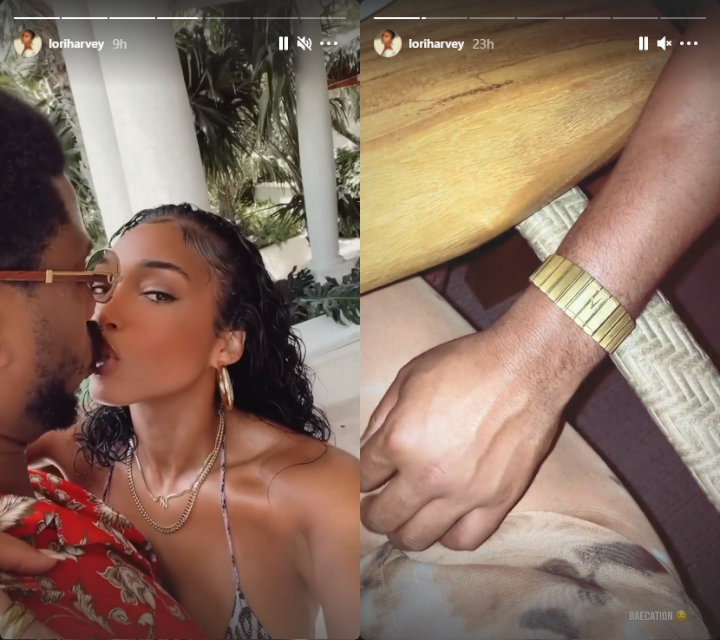 Lori Harvey shared a glimpse at her romantic getaway with boyfriend Michael B. Jordan.

In a separate Story, Lori showed off the beautiful blue water and showed that she and Michael were with friends on the beach. They also seemed to enjoy some tasty food in another clip. A day prior, the model shared a Boomerang clip of what appeared to be the "Creed" actor's hand on her leg. "Baecation," she captioned the video.

Lori also posted a video of luxurious lounge chairs overlooking an infinity pool and the ocean. She then captioned the footage, "Vacation mode starts now." In one Story, Michael could be seen flashing a huge grin as he looked at his girlfriend.

In January, the happy couple made their relationship Instagram official. At the time, Lori confirmed her romance with her boyfriend with Polaroid photos of the pair cozying up to each other on her account. The social media star simply captioned the post with a heart emoji.

In one of the snaps, Lori flashed a big smile as Michael appeared to be about to plant a kiss on her cheek. In another picture seemingly taken during the Christmas holiday, the couple posed with a Christmas tree in the background.

Michael posted on his own page two other photos which were seemingly taken at the same time. In one of the images, the lovebirds stared into each other's eyes as they stood close to each other.