Julie Burchill, who wrote for the Sunday Telegraph, sarcastically suggests that the Duke and Duchess of Sussex should have named their second child 'Georgina Floydina.'

AceShowbiz - A columnist posting a racist tweet about Meghan Markle and Prince Harry's newborn daughter has lost her job. Julie Burchill, the Sunday Telegraph's writer, was fired after she sarcastically suggested that the Duke and Duchess of Sussex should have named their baby girl "Georgina Floydina," in reference to George Floyd.

Julie made the announcement via Facebook on Tuesday, June 8. "I've been sacked by the Telegraph - it's been a lovely five years, and I'll always be grateful to them for ending my Wilderness Years," she first wrote.

"However, I'd be lying if I said that I hadn't often moaned to my husband recently about them always rejecting my edgy column ideas and giving me more pedestrian ones - which I've done splendidly anyway," she continued. "I hope you can see my archive here. Onwards and upwards!" 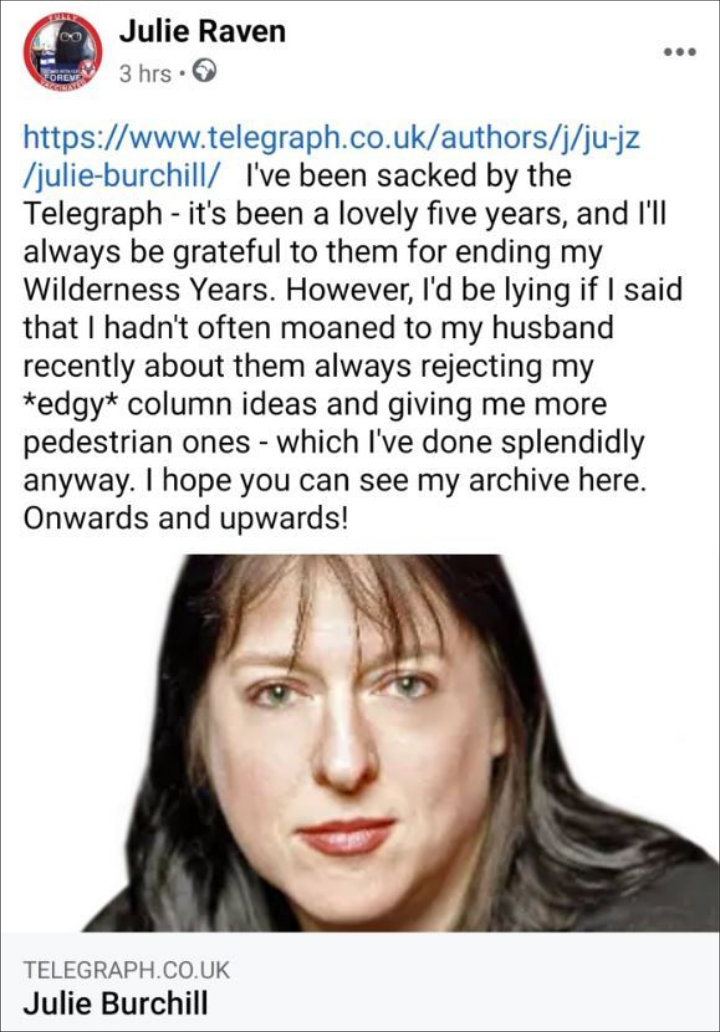 Julie Burchill revealed she was fired from the Sunday Telegraph.
Editors' Pick

The firing came just two days after Meghan and Harry announced the arrival of their second child, Lilibet "Lili" Diana Mountbatten-Windsor. Shortly after the royal couple broke the happy news, Julie tweeted, "What a missed opportunity! They could have called it Georgina Floydina!"

Also making an offensive joke was British lawyer Joanna Toch, who commented on Julie's post by asking, "No Doria? Doesn't the black name matter?" Julie then wrote back, "I was hoping for Doria Oprah, the racist rotters." In response, Joanna further pressed, "Doprah?"

The two have since drawn criticism from many. Joanna, however, has issued an apology by tweeting, "I am very sorry for the comment and what I saw as a joke. I've fought during my professional life against racism which is abhorrent. I'm not a judge and I have children of colour and I apologise unreservedly."

In the wake of the backlash, Joanna's Family Law Cafe suspended her "with immediate effect pending an internal review into her recent comments." The firm added in a statement, "FLC considers her comments as offensive, unacceptable and highly contradictory to the inclusive manner in which FLC has always and will continue to work with members of all communities in managing the challenges of matrimonial and family disputes."