When setting the record straight about the ongoing speculations about her, the 'Harry Potter' actress promises that she will share the news directly if she has any.

AceShowbiz - Emma Watson could not stay silent amid circulating speculations about her life. Shutting down rumors about her engagement and "dormant" career, the actress best known for her role as Hermione Granger in the "Harry Potter" film series begged her fans and followers to make no assumption about her.

Returning to Twitter on Monday, May 17, the 31-year-old shared a series of posts that slammed speculations about her possible engagement to boyfriend Leo Robinton and her rumored retirement. "Dear Fans, Rumours about whether I'm engaged or not, or whether my career is 'dormant or not' are ways to create clicks each time they are revealed to be true or untrue," she began tweeting.

"If I have news - I promise I'll share it with you," the "Little Women" actress continued. She further stressed, "In the mean time please assume no news from me just means I'm quietly spending the pandemic the way most people are - failing to make sourdough bread (!), caring for my loved ones and doing my best not to spread a virus that is still affecting so many people." 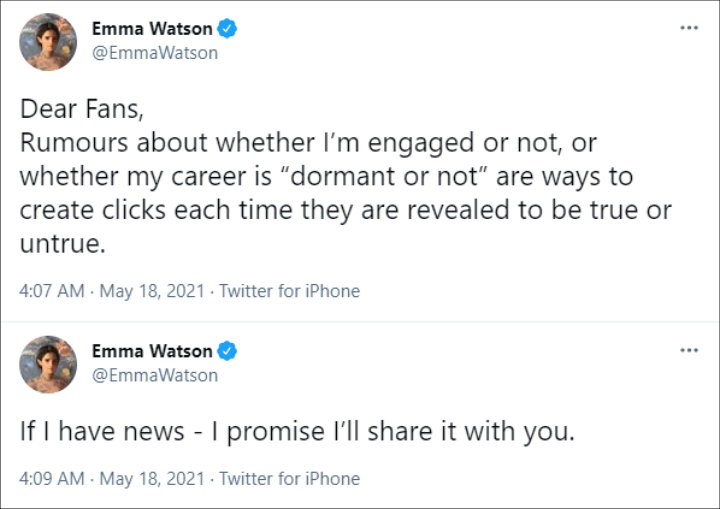 Emma Watson shared a series of posts that slammed ongoing speculations about her.
See also...

In her last tweet, Emma wrote a sweet message that read, "I am sending so much love to you, hoping you're ok and as well and happy as you can be in these strange times. And again, thank you to everyone working so hard to keep us safe and well. E Xx." These were her first updates since she last tweeted on August 2020. 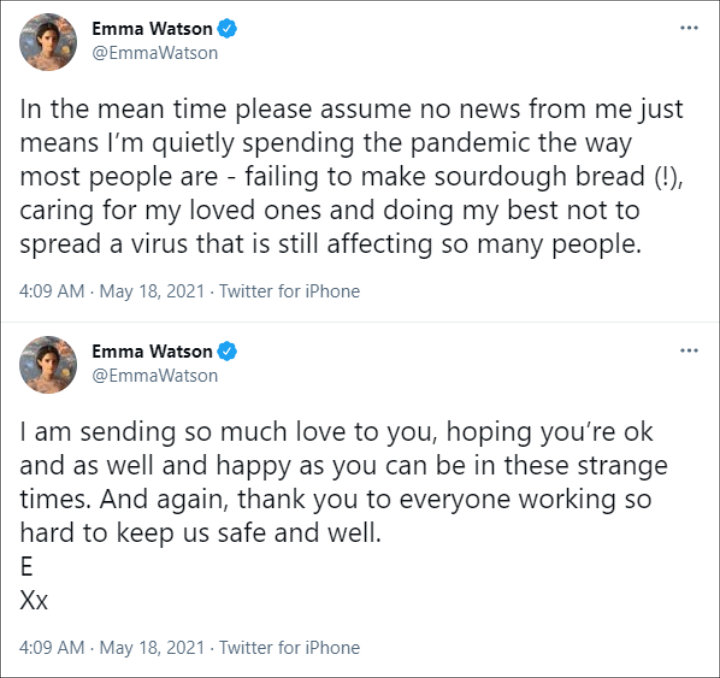 Emma Watson asked her fans to assume 'no news' from her.

Emma's tweets came just two days after she and Leo were spotted in a rare public outing. On Saturday, May 15, the "Beauty and the Beast" actress and her businessman boyfriend were seen leaving a store in Los Angeles.

For the outing, "The Perks of Being a Wallflower" star was seen in a casual outfit consisting of a gray sweater and what appeared to be pajama pants. Going makeup-free, she styled her short hair in messy waves. Her boyfriend of almost two years, in the meantime, wore a white tee and skinny jeans. To complete his look, he wore brown loafers.

In the photo, Emma and Leo were pictured leaving a pharmacy store with him carrying bottles of Aspirin and vitamins, as well as a Shamwow cloth. The couple was first romantically linked in October 2019. They have kept a low profile since they started dating.

Emma Watson on Being Mistaken for Emma Roberts in 'Harry Potter' Special: It's Too Cute