When pressed about how many men he has hooked up with, the former star of 'The Bachelor' points out during a Q-and-A session that he will only share what he wants.

AceShowbiz - Colton Underwood has made it clear that he is limiting the exposure to his love life. When a follower asked an "inappropriate" question about his sex life, the season 23 lead of "The Bachelor" deflected to answer it by stressing that he's "respecting" himself.

On Sunday, May 16, the former NFL player held a Q&A session on his Instagram Story page. Upon receiving a question about how many guys he had hooked up with, he replied by first stating, "Let me vent for a second." He continued, "Questions like this are inappropriate. I understand you might know me from the bachelor where I shared a lot about my personal life." 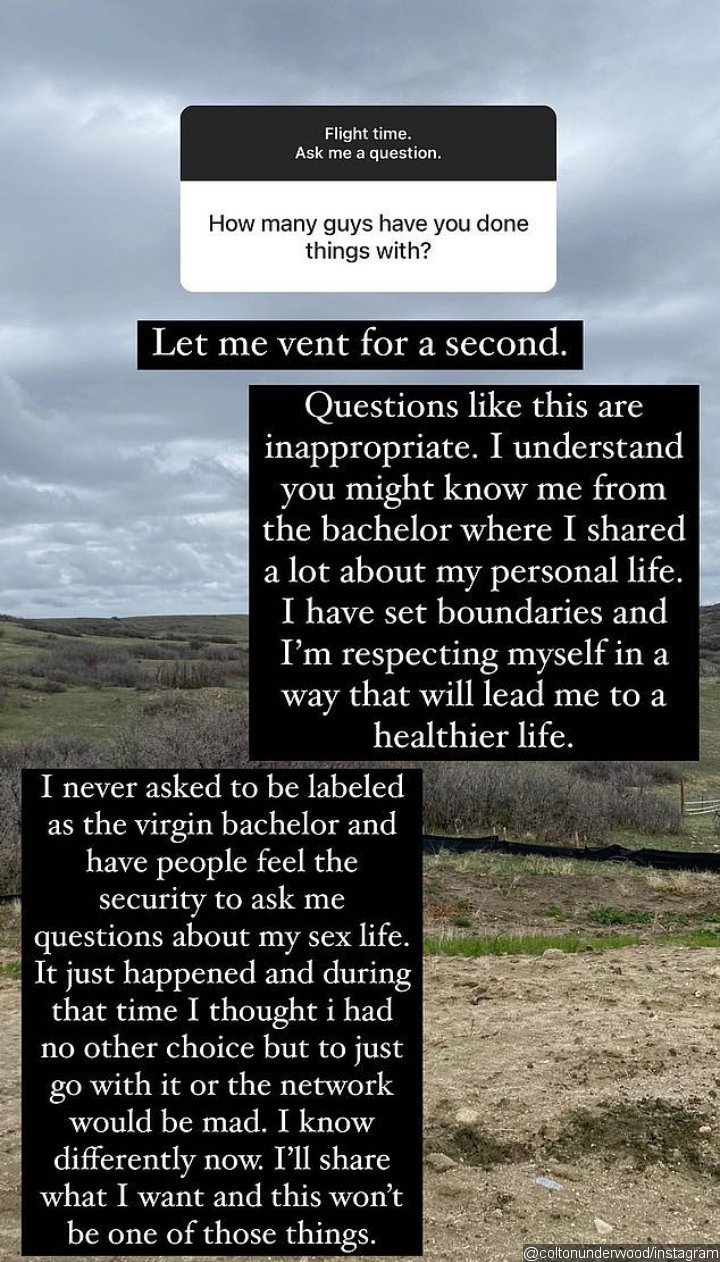 "I have set boundaries and I'm respecting myself in a way that will lead me to a healthier life," the 29-year-old reality star went on to stress. He further added, "I never asked to be labeled as the virgin bachelor and have people feel the security to ask me questions about my sex life."

The ex-boyfriend of Cassie Randolph, who came out as gay back in April, added, "It just happened and during that time I thought I had no other choice but to just go with it the network would be mad. I know differently now." He concluded his reply by pointing out, "I'll share what I want and this won't be one of those things."

Colton's clapback came just days after he opened up to Variety that he went public about his sexual orientation out of fear . In a piece published on Wednesday, May 13, he unveiled, "I'll just say it, I, at one point, during my rock bottom and spiral, was getting blackmailed. Nobody knows I was blackmailed."

"The Bachelorette" alum spilled that the blackmail came after he made a secret visit to a spa known for catering to gay clientele. At the time, he was living in Los Angeles. He dished that in the wake of his visit, he got an anonymous email threatening to "out" him using his nude snaps obtained while he was at the spa.

Though he insisted that he was at the spa "just to look," Colton did admit he "should have never been there." He went on to say that the threatening email sent him into a panic, prompting him to forward it to his publicist, Alex Spieller. "I knew that out of anybody in my world, my publicist wasn't going to ruin me," he stated.