Meanwhile, Floyd's daughter YaYa Mayweather slams both Jake and Logan Paul on social media in the wake of the brawl between her dad and the 24-year-old YouTube personality.

AceShowbiz - Jake Paul got himself injured in a physical altercation with Floyd Mayweather, Jr.. The YouTube star, who was attacked by the legendary boxer after snatching his hat, claimed that one of his eyes got punched during the brawl.

"honestly have had 3 easy fights as a pro so been itching for some real action. 1 of Floyd's 30 bodyguards got a clean shot on me in the eye," the 24-year-old internet personality wrote on his Twitter account. "RESPECT!!" 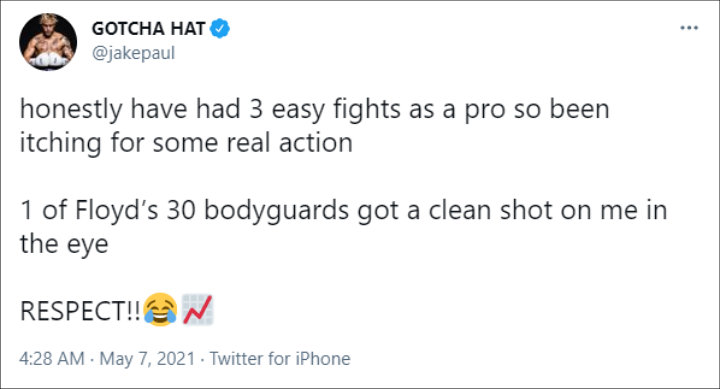 Jake Paul claimed he got his eye punched in a fight with Floyd Mayweather, Jr..

A few hours later, Jake sent out another tweet that read, "word on the street already is that Floyd is sending goons after me to try and kill me or hurt me." He further stressed, "if I die....... I died for the hat."

Jake and Floyd had a fight at a Miami press conference, where the latter promoted a June 6 fight with Jake's older brother, Logan Paul. It started after Jake confronted the champion boxer during his interview. Prior to that, the 44-year-old called him and his sibling "fake fighters."

In a clip shared by Jake on Instagram, he and Floyd were trash-talking each other before the former stole the latter's hat. Securities then jumped between the two as Floyd surged toward him.

In the wake of the tussle, Floyd's daughter Yaya Mayweather slammed Jake on her Instagram Story. "@jakepaul wait you said who gave you a black eye??? [crying laughing emoji][crying emojis]," she wrote over a snap of his father and Jake.

Hours before that, Yaya put out a photo of her dad and Logan. In the accompaniment of the snap, she argued, "Boy you done f**ked up your a** is going to be layed out on the canvas June 6th." 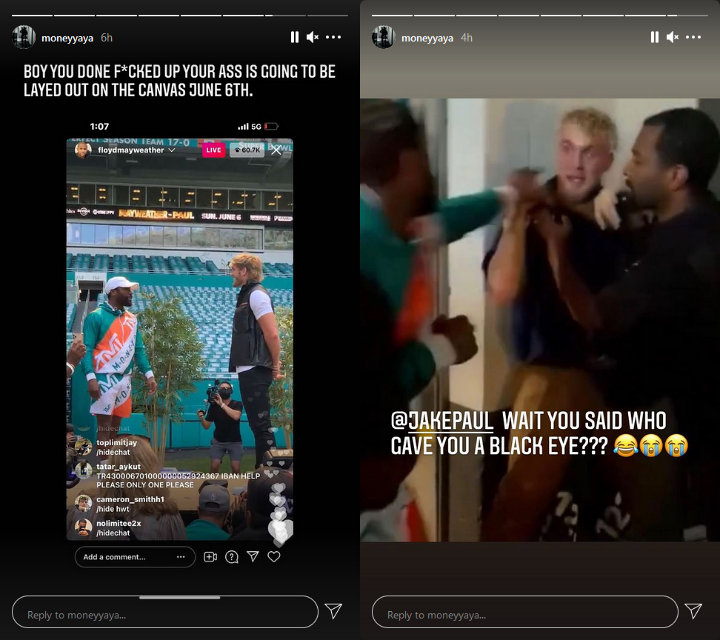 As for Jake, he kept poking fun at Floyd following their fight. Taking to Instagram, the former "Bizaardvark" star shared a video of him getting a new hat tattoo with "gotcha hat" inked underneath the piece. In addition, he launched a "gotcha hat" merch.