The RnB singer's Instagram post quickly grabs people's attention in a kind of bad way as some think that the 39-year-old star isn't at the age to show off a hickey.

AceShowbiz - Keyshia Cole is in love and is proudly bragging about it. The "Love" singer took to her Instagram account to share a video featuring the "love bite" that she got from her new man on her neck.

She hinted in the caption that she loved the hickey, though she would be more thrilled if her man would make it more obvious. "Next time make it darker bae," she wrote over the video. "Issa vibe."

The video quickly grabbed people's attention in a kind of bad way as some thought that the singer wasn't at the age to show off a hickey. "way too old to be hype about a hickey," someone wrote in an Instagram comment. "Too old to be flexing a hickie," another person added. Meanwhile, one person thought that Keyshia was trying to make someone jealous, saying, "She just tryna get someone mad .... we know the games Keyshia."

Keyshia apparently caught wind of the criticism and didn't mince her words in her response. "How can u be too old for a hickey ?? You b***hes crazy," Keyshia tweeted. "And whoever said it. F**k ya! #Respectfully."

Another fan reacted, "Not too old...but damn Keyshia why we had to know and see." To that, the R&B star responded, "If I were regular would it have mattered? Hey man. It is what it is. Love is in the air. And that's ok. People be so caught up and judging.... which is fine. I no longer live for the world or my fans. I live FOR ME!"

"It's not that your too old for a hickey , but that fact you felt the need to post it , was VERY childish !" one person argued, adding, "especially when you have kids & are in the public eye like that! @KeyshiaCole." Still, Keyshia didn't see why it was a problem. 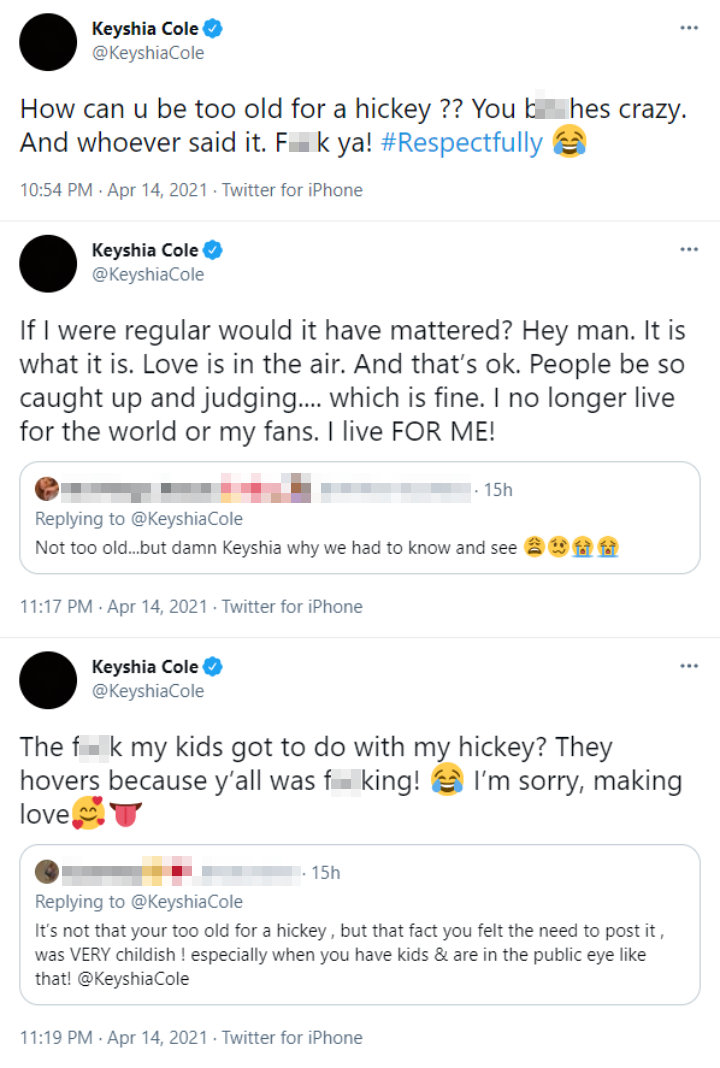 Keyshia Cole fired back at haters.

She wrote to the critic, "The f**k my kids got to do with my hickey? They hovers because y'all was f***ing! I'm sorry, making love."

Keyshia Cole Says O.T. Genesis Apologized to Her Twice Prior to 'Verzuz' Duet