The 'Ex on the Beach UK' alum brings home his 8-months-old daughter Azaylia from hospital after doctors declared there was nothing they can do to help her in her battle with leukemia.

AceShowbiz - Ashley Cain has shared a poignant poem dedicated to his dying baby girl. Hours after he announced that he is bringing home his infant daughter Azaylia from hospital since doctors said she only had days to live, "The Challenge" star shared the London Underground message to express his gratitude.

On Friday, April 9, the 30-year-old turned to Instagram Story to repost @allontheboard's heartfelt white board message. In the image, it could be seen that the note written on the board located at North Greenwich London Underground Station began with, "Sending love to Azaylia Cain, an 8 month old beautiful little princess and a hero."

"Smiling despite being in discomfort and pain," it went on to read. "Fighting battles and shining like a diamond, providing light on the darkest of days; her determination and strength deserves everybody's love and respect, in so many ways. "

The poetic message continued, "No words can be written or spoken to fix hearts that are broken. All we can offer sometimes are thoughts, prayers, and love; through the hardest and saddest times." At the end, its unknown writer praised Ashley's daughter, "Azaylia has shone brighter than any star up above."

While Ashley only added folded hand emoji alongside a heart emoji, his girlfriend Safiyya Vorajee expressed her gratitude to those behind the sentimental tribute. Through an Instagram Story she posted on Friday, she gushed, "The [love] is incredible. Thank you to you all [love]." 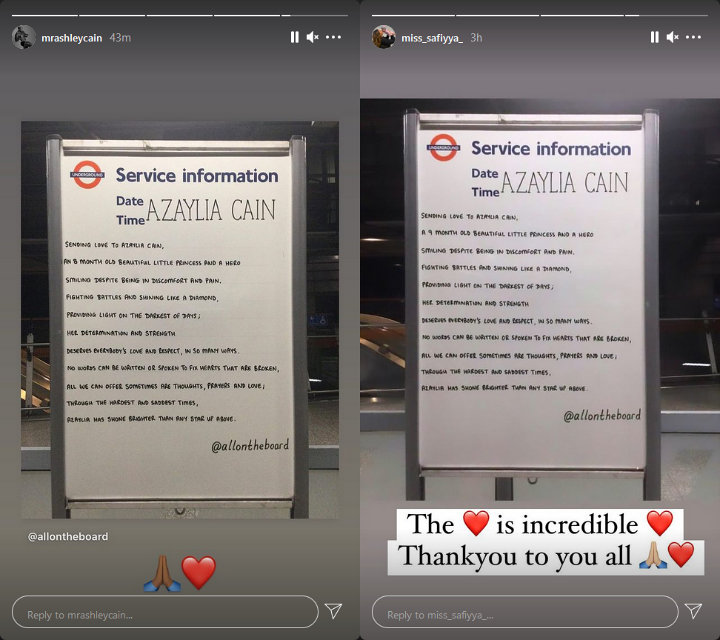 Ashley Cain and his girlfriend Safiyya Vorajee expressed their gratitude via Instagram Story.

Ashley Cain's 8-month-old daughter Azaylia has been fighting a rare form of leukemia. On Thursday, April 8, he shared the heartbreaking news that doctors told him there is no more treatment left to save his daughter. "We're going back home and we're gonna try and make our baby as comfortable as possible," he informed his fans. "We're gonna be strong, and we're gonna go out with honor."

Hours afterward, Ashley shared photos of him giving Azaylia her last bath in the hospital. Along with the "Ex on the Beach UK" alum shared the bathing moment. Along with the post, he shared a lengthy caption that read, "9 days ago consultants told us my daughter had 1-2 days to live, but thought she may pass that evening."

"Even with a barbaric disease consuming her blood, tumors in her brain and organs and amounts of pain I cannot imagine... She is still battling through 9 days later, with parts of the day with nothing but smiles despite her discomfort," he raved. "This is a testament of this little girls strength and the fight she has possessed all of the way through."

Near the end of his message, Ashley left a note to his baby girl that read, "The truth is, I don't know what I will do without you. But for now, I find strength in giving you the best of me, and the only me that you deserve! You are in my arms, my thoughts, my prayers and my heart everyday my princess." He then ended the note with a declaration, "YOU'RE MY HERO! DADDY LOVES YOU! [love]."