The 'Yellow Bone' singer has taken to her Instagram account to share a self-reminder message, which is originally posted by Nicki Minaj, about how women should be treated by their men.

AceShowbiz - DaniLeigh seemingly is still feeling some type of way toward ex-boyfriend DaBaby. The "Yellow Bone" singer took to her Instagram account on Sunday, February 21 to share a self-reminder message about how women should be treated by their men.

The singer reposted a tweet from Nicki Minaj that read, "Dear all of you beautiful souls. A man who loves you does not: 1. Humiliate you on social media 2. Beat you 3. Cheat on you." The "Anaconda" hitmaker then stated that a man shouldn't call his lover out of her name or "put [her] down to lower [her] self esteem due to his own insecurities."

As for the last thing, Nicki noted that a man should not "hide his phone, passwords, where abouts, etc." Expressing agreement to the statement, Dani simply wrote, "Right." While Dani didn't name-drop anyone in her post, fans believed that she alluded that DaBaby might have done one or more of the things listed in the post. 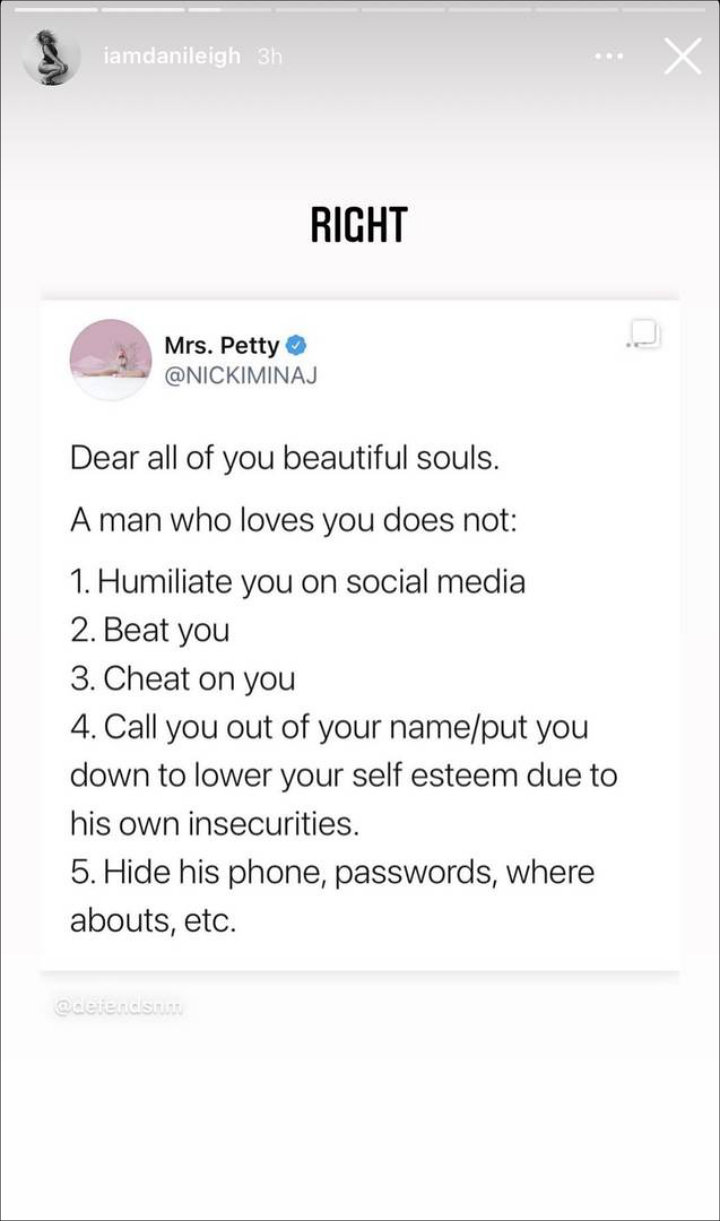 Dani confirmed her split from the "Rockstar" hitmaker via Instagram Story on Sunday, February 7. The singer posted a black background note with a simple message that read, "OFFICIALLY SINGLE" alongside one black heart emoji.

"Why can't I make a song about for my light skin baddies ?? Why y'all think I'm hating on other colors when there are millions of songs speaking on all types.. why y'all so sensitive & take it personal .. gahhhh damn," she explained her intention. "And I said is what he want !!!! Not what the world want ... I'm talking about myself ... stop playing w me . Y'all NOT FOR ME. Done talking .. bout to post how fine I looked yesterday."

However, as the backlash continued, she then issued an apology. "It wasn't something that I looked at deeply…. I'm sorry that I wasn't sensitive to the topic…. I definitely feel misunderstood," she said in a video.