The reality TV star also warns Bravo that she has receipts about its alleged racism towards black women in reality TV, adding that she 'never got rid anything' and demanding that they 'fix your dirty work.'

AceShowbiz - Drama surrounding NeNe Leakes doesn't show any hint of stopping. Instead, it further escalates as the former "The Real Housewives of Atlanta" star was reported to have been dropped by her entire team, including her agent, her manager, her lawyer as well as her PR team.

A source claimed to Perez Hilton that Steven Grossman at Untitled Entertainment dropped NeNe and that she's officially no longer repped by ICM Partners. In addition, the TV star has parted ways with her lawyer Darrell Miller of Fox Rothschild LLP and her public relations firm, Jonesworks PR.

"NeNe has been impossible to work with for a very long time now," the source detailed. Another source noted to the news outlet, "I'm genuinely concerned for her mental health. She thinks the world is out to get her and refuses to take accountability for her actions."

The news arrived after NeNe took to her Twitter account on Monday morning, February 8 to call out Steven. "You can't turn on your teammate and get away with this @stevengrossman #DarrellMiller #Foxrothschild," so NeNe wrote to her followers. "suppression, retaliation, discrimination, unequal pay, devaluation against black women is real, it's painful and it hurts. I will fight for all women rights PS: FIX IT."

In the next tweet, meanwhile, NeNe warned Bravo that she had receipts about its alleged racism towards black women in reality TV. "I have numerous emails, text messages, RHOA group text, voice recording that go back yearsssss. I never got rid of anything! Fix your dirty work," so NeNe took aim at the network. "Being a racist is so yesterday." 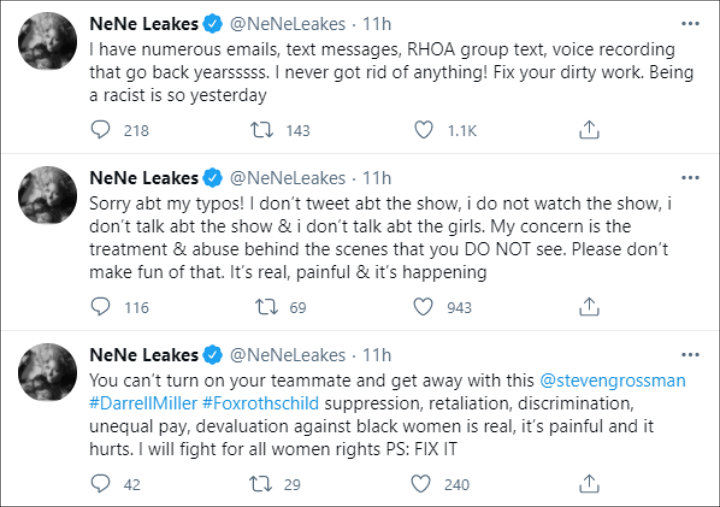 NeNe Leakes called out her team and Bravo.

Internet users seemed to be divided when it came to the matter. Some were taking issues with how NeNe only starts speaking up against the network after being fired from "RHOA". "And you didnt seem to care for yearsssssss untill they didn’t bow to your demands.. NOW it is an issue," one user pointed out. Another user questioned, "If this is how you and the other ladies have been treated, WHY were you negotiating your contract to return for the CURRENT SEASON? If it was that bad why were you even entertaining the thought of coming back. I'm confused."

Another person said, "The negativity is consuming you. It's unhealthy. Let it go. Move on. Be happy." However, some others jumped to NeNe's defense. "It's disgusting that some of y'all telling her to let it go. I'm sure there is some validity to what she's claiming. At least hear her out before y'all dismiss everything as being bitter," one fan shared. Echoing the same sentiment, another added, "Telling her to let it go is how slavery lasted almost 200 years. Imagine if they would have let it go because it had been almost 200 years? Yep, we'd still be slaves!"