The 'Malibu' songstress expresses her excitement to be a part of the event, which will be held before the kick off of the big game at Raymond James Stadium in Tampa, Florida, on February 7.

AceShowbiz - Miley Cyrus is set to perform at the pre-Super Bowl LV show "TikTok Tailgate". Set to serenade vaccinated health care workers who will be the special guests at the February 7 event, the "Malibu" songstress took to social media to express her excitement.

The 28-year-old made the announcement via Instagram on Sunday, January 24. "SUPER BOWL LV!!! I'll be there for TIKTOK TAILGATE!!! I can't wait to put on a show for the NFL's honored guests before the game…. Health care workers from Tampa and around the country! Join the tailgate at 2:30 PM ET FEBRUARY 7 on @TikTok & @cbstv ! #SBLV," she declared.

Miley's post came hours after the NFL made public her appearance. Via its official Twitter account, the organization tweeted, "@mileycyrus will be at Super Bowl LV to perform at the first-ever #TikTokTailgate – the NFL's pregame event for the 7,500 vaccinated health care heroes who have been invited to attend #SBLV. Join the tailgate FEB 7 at 2:30 PM ET on @tiktok_us & @CBS!" 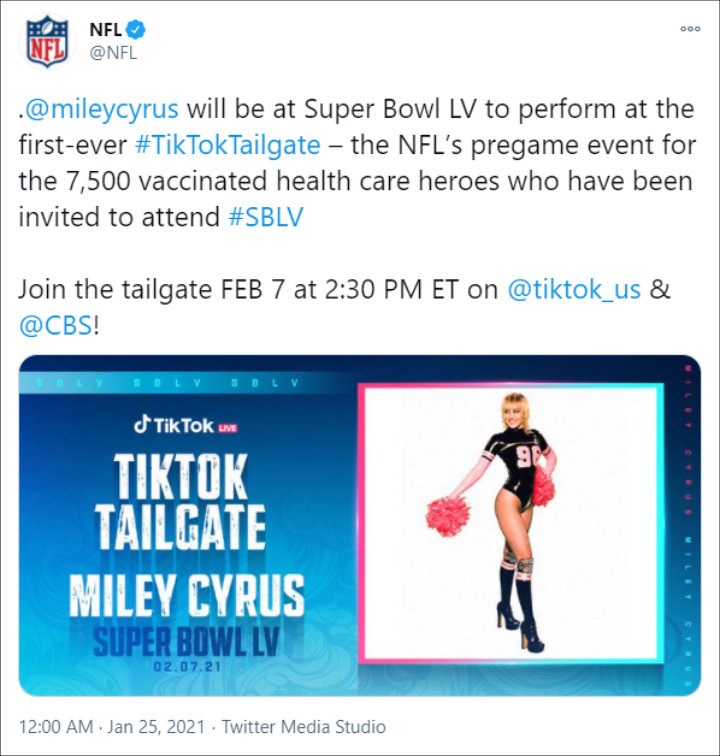 NFL Commissioner Roger Goodell confirmed in a released statement the NFL invited medical workers to thank and honor them for their contribution during the pandemic. "These dedicated health care workers continue to put their own lives at risk to serve others, and we owe them our ongoing gratitude," he stated.

"We hope in a small way that this initiative will inspire our country and recognize these true American heroes," Roger added. "This is also an opportunity to promote the importance of vaccination and appropriate health practices, including wearing masks in public settings."

In addition to 7,500 health care workers, 14,500 additional fans are also expected to attend the show at Raymond James Stadium in Tampa, Florida. It was previously revealed that The Weeknd is tapped as headliner for the 2021 Super Bowl halftime show. Country singer Eric Church and R&B singer Jazmine Sullivan will sing the national anthem, while H.E.R. is set to perform "America the Beautiful".

Miley Cyrus Tearing Up During 'Wrecking Ball' Performance: My Heart Gets Broken a Lot 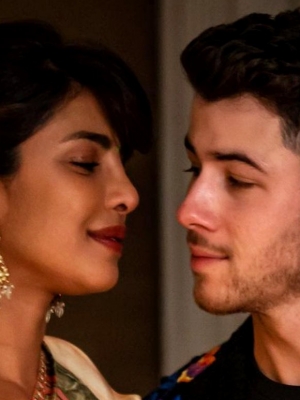