While sharing her private conversation she had with the former NFL star, the 'Southern Charm' star points out that she 'kept her mouth shut until she gets called a liar.'

AceShowbiz - Madison LeCroy is clearing things up about her rumored relationship with Jay Cutler. Two days after the former NFL star reunited with estranged wife Kristin Cavallari, the "Southern Charm" star revealed the text messages allegedly sent by him to her.

"Morning. Yes, so, it looks to me like I'm going to have to drop some receipts," the reality star first said of the matter in a video she posted on Instagram Story on Sunday, January 24. She went on to add, "Hate to do that."

Madison then added a screenshot of the private conversation she had with Jay. In the texts, she wrote, "What were you coming here for? Cause you didn't tell me anything." In response to her question, the retired professional football player replied, "To hang out with u... Do you want to hang out next weekend?"

Madison continued explaining, "I've never said anything about Kristin nor would I. I came into this honestly with good intentions. I want no part of being involved in a payback or drama. But you initiated and pursued." Over the screenshot, she wrote, "I kept my mouth shut until I get called a liar." She additionally put out a selfie of her and Jay and wrote, "Too bad it didn't work out." 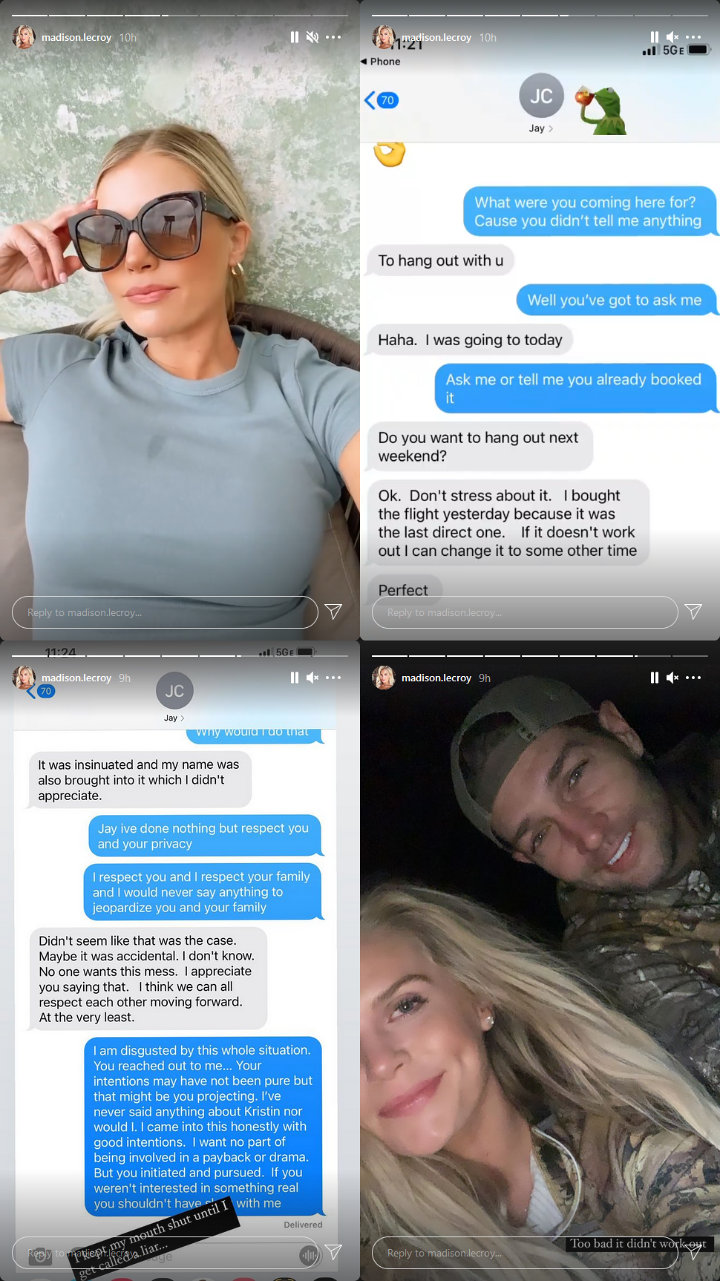 Madison LeCroy shared publicly the alleged text messages of her and Jay Cutler.

Madison's revelation came two days after Jay and Kristin sparked reconciliation rumors. On Friday, January 22, the exes posted on their respective Instagram accounts similar pictures with cryptic captions. In the snaps, "The Hills" alum posed alongside her estranged husband with her leaning over his shoulder. "The world is full of users. 10 years. Can't break that," so read the captions of the image.

Jay and Kristin, who were first romantically linked in 2010, called it quits in April 2020. Following their split, the Uncommon James founder was rumored to be dating comedian Jeff Dye. She was also linked to Madison's ex, Austen Kroll, after they were spotted enjoying a dinner and dancing together in December. However, she and Austen shut down the speculations.

As for Jay, he was rumored to be in a relationship with Madison after she hinted at a new romance between them. When appearing on "Watch What Happens Live with Andy Cohen" in early January 2021, she first admitted to host Andy that she did not watch her ex Austen's "adventures" with Kristin.

Madison divulged at that time, "I was busy having my own adventure, but no, I did not." When asked if it was "an adventure of the Jay Cutler kind," she responded, "I'm not kissing and telling."