The youngest poet ever to speak at a presidential inauguration has become the breakout star of the groundbreaking ceremony after reciting her moving original work, 'The Hill We Climb'.

The 22-year-old became the youngest poet ever to speak at a presidential inauguration, and she quickly became the breakout star of the groundbreaking ceremony as she recited her moving original work, "The Hill We Climb".

After her appearance, Oprah took to social media to gush about America's youth poet laureate, as she remembered her late friend and writer Angelou, who appeared at Bill Clinton's first inauguration in 1993.

"I have never been prouder to see another young woman rise! Brava Brava, @TheAmandaGorman!" the TV titan applauded. "Maya Angelou is cheering-and so am I."

Amanda was quick to respond to the kind words, revealing the role Oprah had played in her moment in the spotlight.

"Thank you!" she replied. "I would be nowhere without the women whose footsteps I dance in. While reciting my poem, I wore a ring with a caged bird-a gift from @Oprah for the occasion , to symbolize Maya Angelou, a previous inaugural poet."

"Here's to the women who have climbed my hills before." 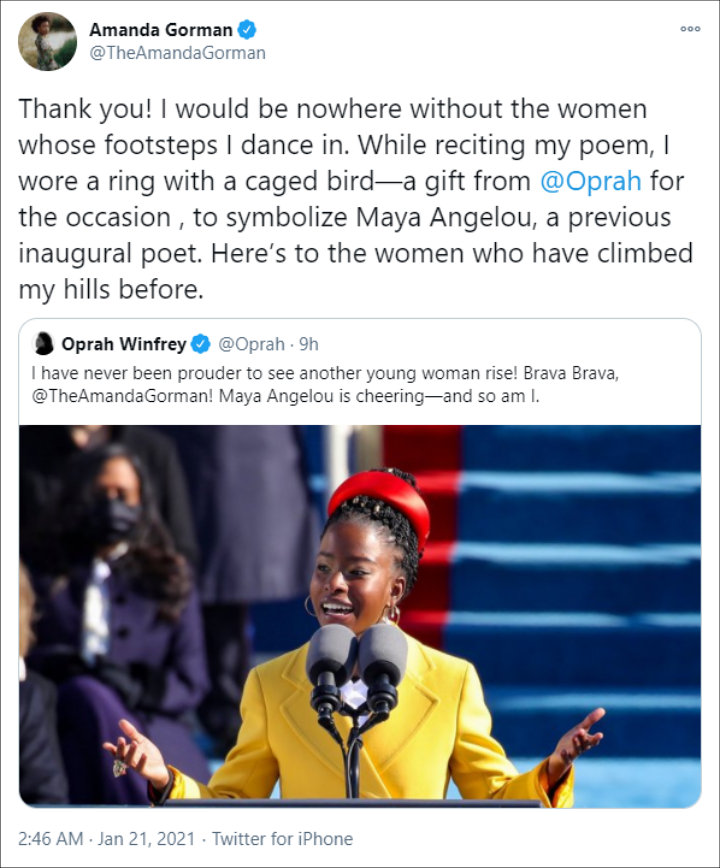 Amanda Gorman shared her feelings after being appointed to be the youngest poet to speak at a presidential.

The caged bird is a reference to Angelou's first memoir, "I Know Why the Caged Bird Sings", and also the title of a piece from her 1983 book of poetry, "Shaker, Why Don't You Sing?".

Meanwhile, Amanda was also thrilled to hear from "Hamilton" creator and former star Lin-Manuel Miranda, after he celebrated her wise words, which called for "unity and togetherness". 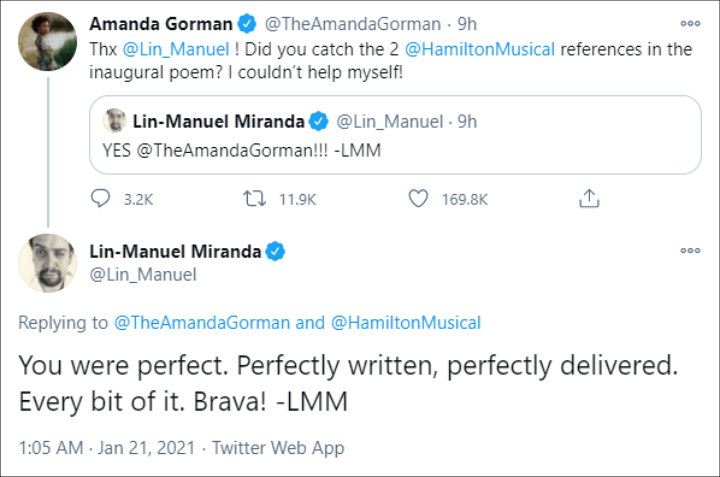 "Thx @Lin_Manuel ! Did you catch the 2 @HamiltonMusical references in the inaugural poem? I couldn't help myself!" she wrote back, as the writer and actor declared, "You were perfect. Perfectly written, perfectly delivered. Every bit of it. Brava!"

Cardi B Refuses to Get Into Bathtub Without Scrubbing It First