The 'Guardians of the Galaxy' actor places a bounty on whoever carved the word 'Trump' into the algae on the back of the animal found in Florida's Homosassa River.

AceShowbiz - Dave Bautista is clearly pissed after learning of the reports that a manatee was discovered with the word "Trump" on its back. Trying to help find the culprit soon, the wrestler-turned-actor has offered a reward for the arrest of "the low life scummy MAGATs" that did the horrible thing.

The "Guardians of the Galaxy" star took to Twitter to announce the $20,000 reward to whoever finds the culprit. He posted earlier this week, "If there's not already a reward for the arrest and conviction of the low life scummy MAGATs that did this I'll throw in $20,000."

And that's not all as he added, "And I promise there will be bonuses to that reward!" When someone suggested that the person(s) who abused the animal deserves a punch in the face from Dave, the 51-year-old responded, "All I'm saying is that there are a lot of Floridians that don't appreciate people f***** with our manatees." 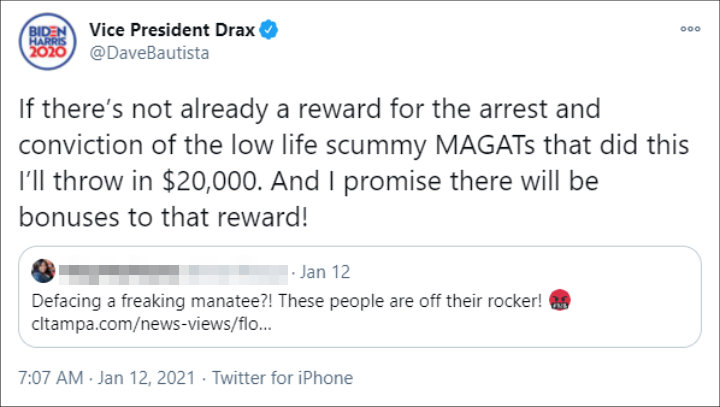 Dave Bautista offered reward for arrest of the culprit who scraped manatee with the word 'Trump.'
Editors' Pick

The manatee with the word "Trump" carved into the algae of its back was found in the Homosassa River in the northern region of Florida on Sunday, January 10. Its unusual markings were identified by boat captain Hailey Warrington.

Dave's offer adds to the $5,000 reward already offered by the Center for Biological Diversity, a non-profit wildlife advocacy organization based in Arizona, following the discovery of the criminal action on the animal.

"Manatees aren't billboards, and people shouldn't be messing with these sensitive and imperiled animals for any reason," Jaclyn Lopez, the Florida director of this organization, said in a press release on Monday. "However this political graffiti was put on this manatee, it's a crime to interfere with these creatures, which are protected under multiple federal laws."