The 'Black Widow' star isn't having it when her followers start attacking the 'Midnight Sun' actress as soon as Bella comments on Florence's Instagram post.

AceShowbiz - Florence Pugh makes it clear that she does not appreciate fans who bullied her friend Bella Thorne. Upon learning that her followers on social media dragged the "Midnight Sun" actress for no reason, the "Midsommar" star set aside time to scold the trolls.

The 25-year-old English native made the move after sharing on Instagram a video of her homemade ravioli. "Mild chilli tomato sauced ravioli with a white wine, butter and herb poached lobster filling. NAUGHTY," she captioned the clip posted Wednesday, January 13. "P.S. yes this vid is from last week but I mean.. when is homemade ravioli not relevant?!"

Florence's post caught the attention of many including Bella who replied, "OMG please come over and make food." However, Bella's comment was met with a number of negative responses from Florence's followers. The online attacks include such comments as "no go away," "stay away from her" and "make your own damn food."

In the wake of the backlash, Florence was quick to jump into Bella's defense. The Yelena Belova of "Black Widow" wrote in the comment section, "to all those negatively trashing Bella, I do not appreciate it or like seeing people being unnecessarily dragged on my page."

The girlfriend of Zach Braff went on to stress, "My page has NEVER been about that and I don't like seeing it. I always appreciate your love but not at the cost of bullying someone else." She then concluded her message by stating, "Enjoy the ravioli!" 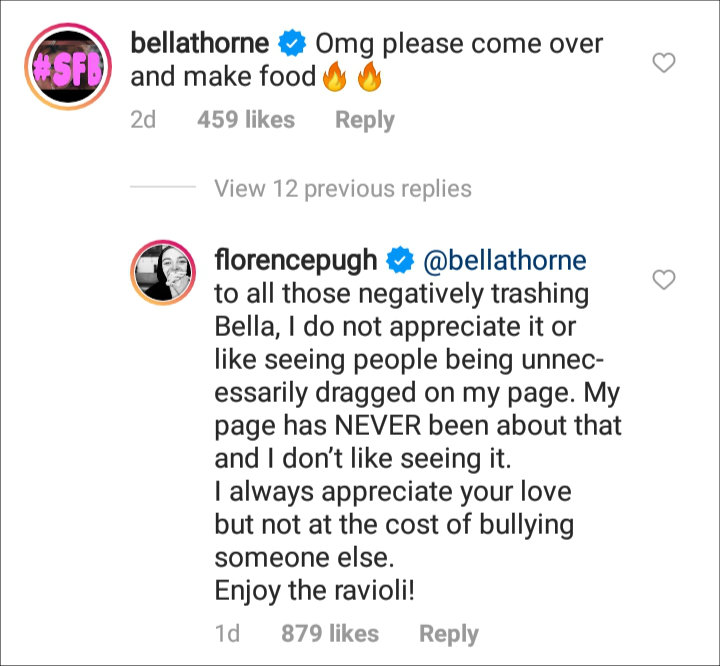 Florence later gained praises from her other fans for standing up against bullying. One individual said, "AND THAT IS WHY I STAN YOU YOU QUEEN." Another echoed the sentiment, "I F**KING STAN U." A third simply exclaimed, "Well said!!"

This is not the first time Bella got slammed online. Back in August 2020, she was criticized by some sex workers after she collected $2 million in less than a week since joining OnlyFans. Many of them claimed that the Disney Channel alum might harm their income.

Bella later issued an apology via Twitter. "I wanted to bring attention to the site, the more people on the site the more likely of a chance to normalise the stigmas, And in trying to do this I hurt you," she shared at that time.

NeNe Leakes Blames Cast and Production for Her 'RHOA' Exit

Florence Pugh Explains Why She Prefers to Date Older Men