The 'Wonder Woman 1984' actor voices his disdain over the Capitol siege after the Texas senator made a scathing comment about his performance in the superhero movie.

AceShowbiz - Pedro Pascal has invited fans to call Texas Senator Ted Cruz and give him a piece of their mind after he savaged the actor's performance in the "Wonder Woman" sequel.

The movie star has shared the politician's Central Texas office phone number and asked followers to "share your thoughts" on both last week's U.S. Capitol siege and comments Cruz made about "Wonder Woman 1984".

Saturday's (January 9) tweet came as Pedro voiced disdain for the U.S. Capitol breach, writing, "The world is watching and history is recording. This disgrace will be FOREVER IN THE BOOKS."

Pedro Pascal shared his thought on the Capitol siege.

He also linked to a list of the Republicans who voted to overturn the 2020 U.S. election results, including Cruz. Donald Trump lost the vote and it's believed all the chatter about a "stolen election" by Republicans led to last week's Capitol takeover. 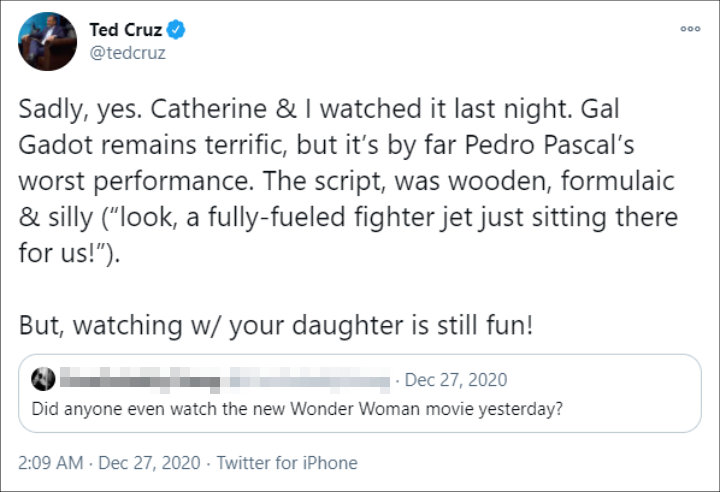 Cruz previously made it clear he wasn't a fan of Pedro's performance in "WW84", writing, "Gal Gadot remains terrific, but it's by far Pedro Pascal's worst performance. The script, was wooden, formulaic & silly." 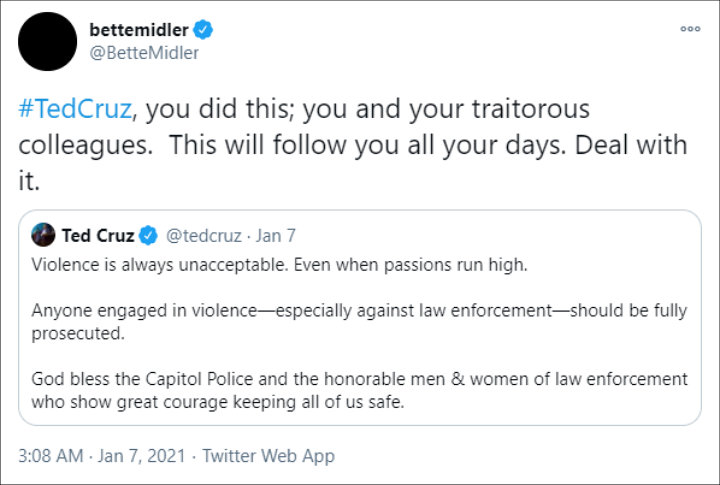 Meanwhile, Bette Midler had Cruz in her sights last week after the Senator called for an end to the violence at the Capitol, stating, "you did this; you and your traitorous colleagues. This will follow you all your days. Deal with it."

Cruz has been facing the public outcry for his resignation and/or expulsion from the Senate for attempting to overturn the results of an election. In his home state of Texas, people demand he resign after his "lies cost lives" in the wake of the Capitol Hill riot.