The 31-year-old 'Go Crazy' musician takes to his Instagram account to fiercely clap back at haters for criticizing his music, alluding that he doesn't need an approval.

AceShowbiz - Chris Brown is proud of his music regardless what people say. The "No Guidance" hitmaker took to his Instagram Stories on Monday, December 28 to defend his works from critics, saying that no one could do what he did.

"Say what you want, but when it come(sic) to what I do, you can't do it," the 31-year-old R&B singer wrote on the photo-sharing site. He went on alluding that he didn't need an approval to feel satisfied with his wown music.

"Approval ain't s**t when you make real music for the people!!! No cocky s**t, but I've been proving myself and providing some sort of comfort for my fans' emotions," he continued writing. "If you think I'm in this studio on some bulls**t, every second of my life, [then] you are out of your rabbit a** mind!"

The musician claimed that he would continue to grind, saying, "Ima keep working overtime because thats what it takes !!! No hate but I respect all the young n****s trying to follow they dream. I hate on no music and no struggle there is room for sunstance, growth."

As to why he wrote the passionate message, the "Royalty" artist explained, "Feel a type of way today so I decided to drop my nutts!" Chris then concluded, "Manifestation is not a myth... spirituality doesn't make you a b***h!" 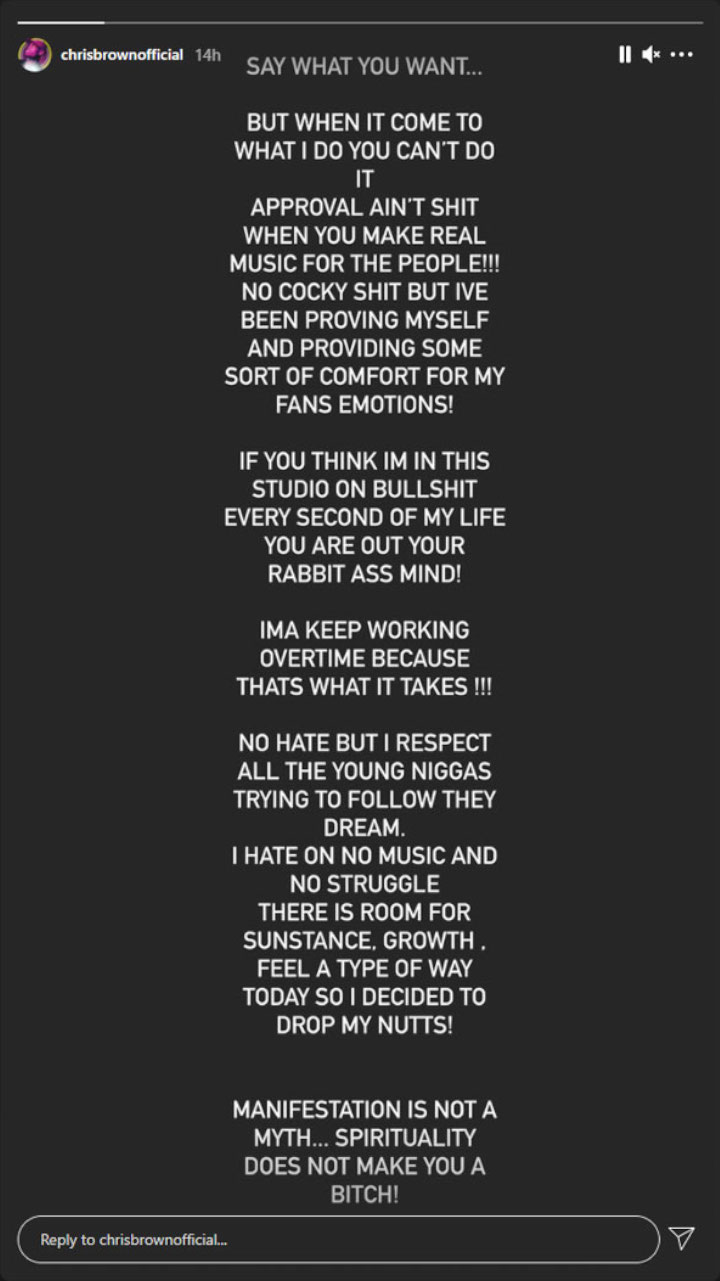 Chris Brown clapped back at haters.

That kind of mentality is probably the reason why Chris has a long-lasting career in music. Last month, Breezy celebrated the 20th anniversary of his career in the R&B and hip-hop game. His close friend Kanye West even sent him an expensive gift to commemorate the longevity in his career by giving him a $120,000 Yeezy Sherp truck.

"Congratulations to Chris Brown on 20 years in the game," the "Gold Digger" rapper wrote to Chris in the gift card. "You've overcome so many hurdles and obstacles. You deserve the recognition for all the hard work you've put in - Yeezy."

A$AP Rocky Disappoints Fans After Arriving So Late at Gig

The Chemical Brothers Postpones Cork Concert Due to COVID-19