AceShowbiz - Lil Baby faces yet other allegations that he's not faithful to his girlfriend Jayda Cheaves. This time, it was coming from adult film star Teanna Trump, who sparked a Twitter war with Jayda after she replied to one of Jayda's posts on the blue bird app.

In the said post, Jayda was joking about giving pictures of herself in nude-colored outfit when someone asked her to send some nude photos. Teanna noticed the post and taunted Jayda by writing to her, "And that's why you got cheated on...," adding a yawning emoji. 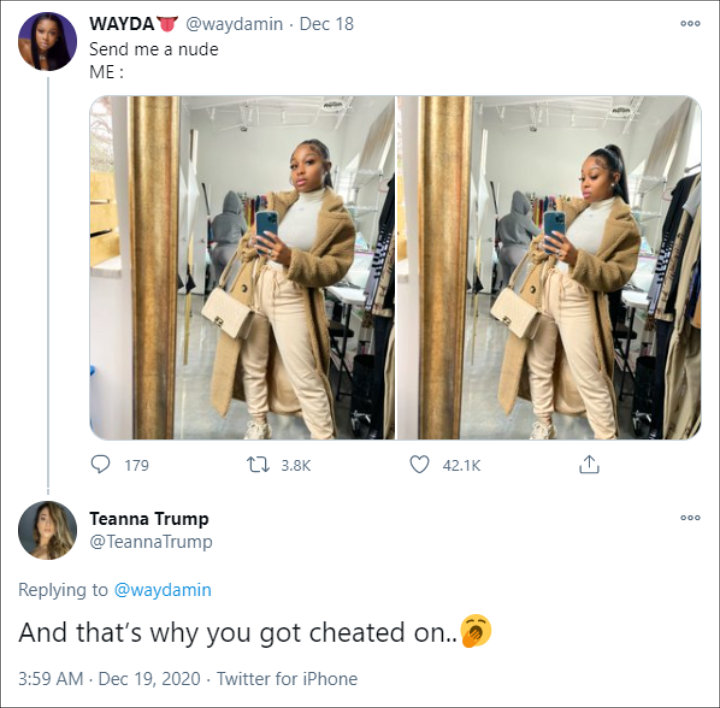 Later, Jayda expressed her frustration in a separate post. "Why these h**s COME FOR ME FIRST then hit me with the check ur man. Like is that what this really be about? Y'all got the game f**ked up. Y'all trifling as hell all y'all. just nasty," so she wrote.

Jayda ranted after the allegations.

One of her followers asked Jayda to "leave that n***a." Echoing the sentiment, someone else convinced her, "Jayda you deserve so much better. I know you're tired of hearing it but you really do!" Another fan agreed, alluding that staying with "The Bigger Picture" rapper will only embarrass her. "Leave baby cause atp he just stay embarrassing you and ruining your image," the person urged.

Ms. London, however, issued an apology to the couple later. "Clearing out the air, their was a small misunderstanding on what I said, I was drinking but what I said was factual dates were just not aligned," she wrote on Twitter on December 8. "And he was PISSED! I apologized and we were supposed to fix it for the public. Does baby love his girl ! YES!!!"

She also said that she "tried to fix" the situation. Ms. London then denied the accusations of chasing clout with the drama, explaining, "When I first spoke I was legit with SOMEBODY ELSE. Tweets were taken out of content. Have I seen him for money yes!! But I was randomly tweeting about him."