The 'Amazing Spider-Man 2' actor and his lady companion go color-coordinated in black while pictured outside celebrity hot spot Crustacean in Beverly Hills.

AceShowbiz - Jamie Foxx isn't short of companion following his split from Katie Holmes. As his former longtime girlfriend is enjoying her heated romance with Emilio Vitolo Jr., the 52-year-old actor has once again sparked dating rumor with a mystery lady.

On Wednesday night, October 14, the "Django Unchained" star was spotted going on a dinner date with a mystery blonde at celeb hot spot Crustacean in Beverly Hills. The two went color-coordinated in black when they were pictured outside the renowned Vietnamese restaurant.

Jamie went with a simple black T-shirt and pants in matching color. He also wore a black hat and a black-and-white mask, teamed with white sneakers. He accessorized with some bracelets and a necklace.

Meanwhile, his dinner partner showed off her legs in a very short black skirt paired with a patterned black jacket. She completed her look with white sneakers and a black face mask, while her long blonde hair was let loose and hang on her shoulders. She was later seen removing her mask in the car while leaving the establishment.

In late September, Jamie was seen holding hands with a blonde woman, who appears to be the same lady seen with the actor in the Wednesday outing. At the time, the duo showed a little PDA while unloading a car outside a fancy hotel in Los Angeles.

The Oscar-winning actor was previously linked to a string of women following the end of his secret romance with Katie. He sparked dating rumors with 26-year-old model Dana Caprio, comedian Natalie Friedman as well as his ex and baby mama Kristin Grannis. He also got flirty with his longtime friend Garcelle Beauvais.

Meanwhile, Katie continued to showcase her hot romance with Emilio. Most recently, on Thursday, October 15, the pair were seen enjoying a day out by riding rented bikes in New York City.

Kehlani Explains Why She Unfollows Megan Thee Stallion on Instagram 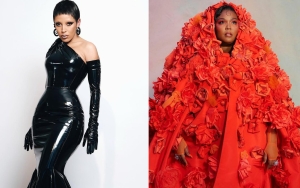