The hip-hop mogul and the Australian model spark dating rumors after they got hot and heavy during a beach date in Malibu, but their relationship is reportedly not 'serious' just yet.

AceShowbiz - Tina Louise (II) has found herself a new man following her summer fling with Brian Austin Green. The Australian model sparked dating rumors with Sean "P. Diddy" Combs after they were spotted getting hot and heavy during a beach date in Malibu.

On Tuesday, October 13, the pair were spotted getting cozy while rolling around on the sand. They were pictured passionately kissing while Diddy was lying on a white towel with black stripes and the tattoo-clad beauty was on her all four. 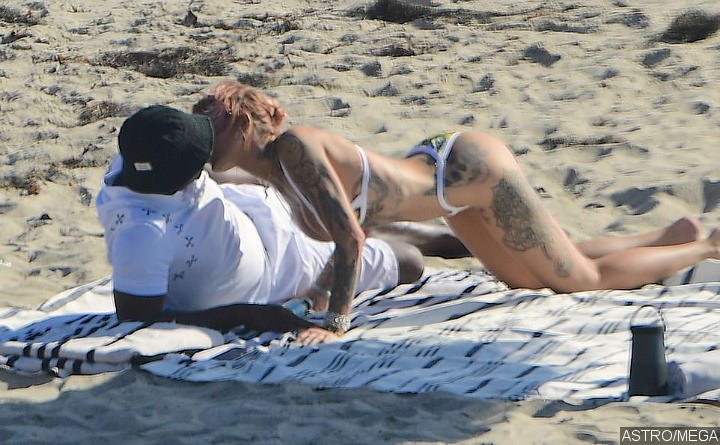 Diddy and Tina Louise were spotted kissing on the beach.

In pictures obtained by Daily Mail, Diddy was even seen putting the white towel on their heads to cover their faces as they continued their PDA session. He placed one hand on her back just above her derriere while she lounged beside him.

They seemed to have a lot of fun together, flashing smiles while strolling along the shoreline. At one point, Tina was seen entertaining Diddy by dancing and twirling her body in front of him. The hip-hop mogul, who carried a drink in his hand, appeared to be in the same mood as he was seen moving his body along with Tina.

The 50-year-old rapper sported a white polo shirt featuring cross patterning along the shoulders, teamed with matching white shorts and a black bucket hat. As for Tina, she bared her curves in a low-cut patterned bikini top, paired with matching bottoms that were styled above her hips.

They spent some time having a chat and bursting into laughter while resting on the sand. Diddy also didn't mind to take a picture with his fans when a group of boys approached him, while Tina gladly captured the moment with her own phone.

Following their PDA-filled beach date, a source tells E! News that Diddy and Tina are casually dating. "Diddy and Tina are having fun together, it's nothing serious," explains the source. "Diddy met Tina through friends and they have been in touch through social media. They have been talking for a few weeks."

While Diddy is "definitely into her and loves her appearance," the source notes that they are both "keeping it casual." On how they spend their time together, the source dishes, "She has been hanging at his house. They have been low-key together, enjoying each other's company."

Tina's sighting with Diddy comes several months after her summer fling with Brian ended in July. A source said at the time of what led to the end of their romance, "All the negative comments and bullying were taking a toll on Tina and the relationship."

Diddy Launches Black Political Party: 'We Own Our Politics'