Eminem and Nick Cannon's Beef Is Allegedly 'Over'

The 'Kamikaze' artist seemingly has forgiven some of his enemies as earlier this month, he squashed his beef with Lord Jamar of Brand Nubian with the help of an associate.

AceShowbiz - Eminem and Nick Cannon's feud is definitely one of the longest beefs in the Hollywood industry. However, it seems like the two have buried the hatched as one of Em's associates claims on Twitter that the two are no longer enemies.

Crooked apparently caught wind of the inquiry. In response to the question, he wrote back to the fan on Wednesday, October 7, "They're not enemies. It's over." 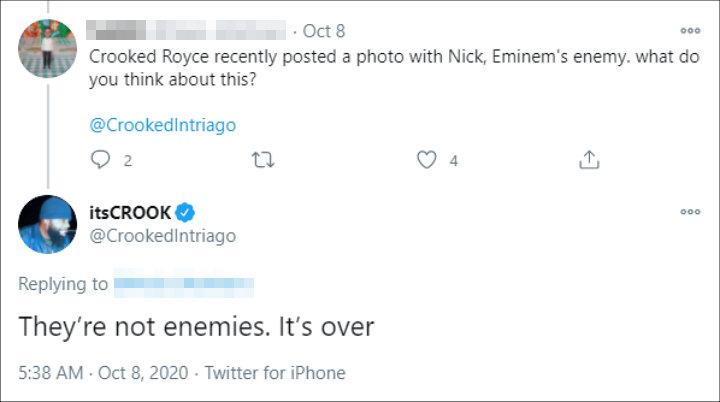 Earlier this week, Royce took to his Instagram account to share a picture of him with "The Masked Singer" host. "Great Minds during not so great times.....," he wrote in the caption. Among those who were caught off guard by the post was D12 member Bizzare who left a shrugging emoji in the comment. To that, Royce asked, "You got sum'n you wanna say?"

Eminem seemingly has forgiven his enemies in the past few days. Earlier this month, he squashed his beef with Lord Jamar of Brand Nubian after being at odds for a long time. Royce played a big role in the new development between the former enemies.

"For the record, now that all this Vlad s**t is done," Jamar told Royce when he appeared on "Godcast", "tell your boy Marshall, you know -- we good." Smiling, Royce responded, "He'll like to hear that."

Eminem Can't Be Killed in Music Video Released With New Album 'Music to Be Murdered By: Side B'

Steve Harvey Warns Daughter Lori's Boyfriend Michael B. Jordan: 'I Still Got My Eye on Him'