Shutting down the haters, the 'Holding You Down (Goin' in Circles)' songstress shares that she didn't intentionally try to lose some weight by going vegan.

AceShowbiz - Jazmine Sullivan has defended her body transformation after dropping a lot of weight. The R&B singer recently stunned her Instagram followers with her slimmed-down figure after sharing a new picture of her rocking a body-hugging dress, but some naysayers chose to pick on her over her "sickly" look.

But the Grammy-nominated artist is unfazed by the criticism. Responding to the haters' comments, the 33-year-old has taken to her Instagram Stories to explain how she came to drop some pounds despite never setting a goal to do so.

"Last week some people dragged me saying I looked sickly," she began the statement posted along with the same picture that caused the chatter. Insisting that she's healthy, she claimed, "I'm honestly a size 12. 180 lbs. There's nothing skinny abt me but my neck. I'm 5'8 however, so I sometimes photograph a little leaner than I am."

Jazmine went on sharing that she is going vegan to encourage her mother who is battling cancer, but turns out her new lifestyle helped her change her look for the better. "My goal was to support my mother thru her battle w cancer by going vegan with her, and in turn it helped me aswell," she continued.

Unapologetic about it, she added that she plans to maintain her new healthy lifestyle. "And I feel really good," she stressed. "I have a lot of things to work on in my journey and am not nearly the model for health and fitness. But I'm trying... And I'll continue to do so w my momma!"

"Bless ya'll, love ya'll," she wrote, before sharing some messages to the haters and trying to encourage people to vote at the upcoming presidential election, "Stop talking bout people. Vote in November!" 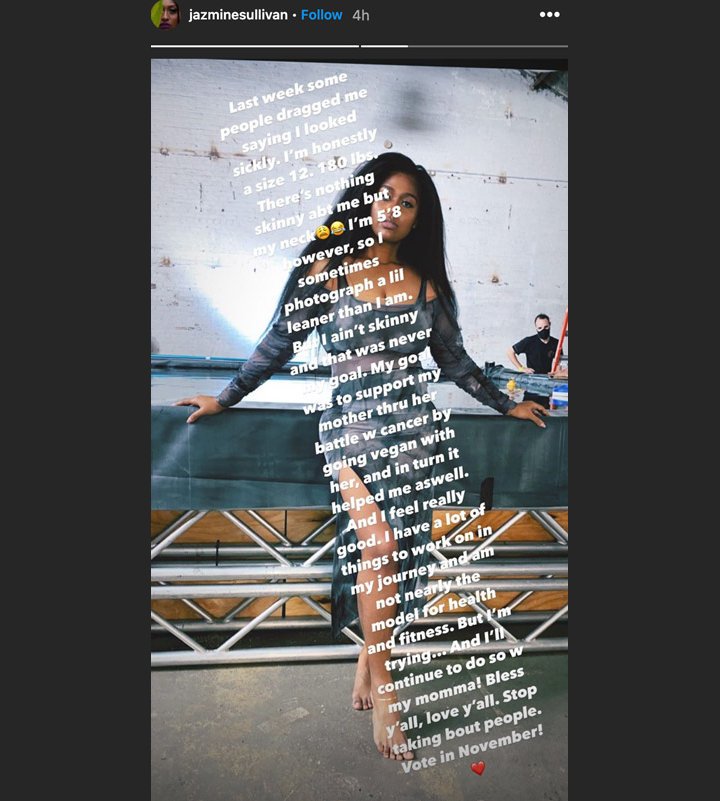 Jazmine Sullivan clapped back at critics of her weight loss.

Jazmine recently returned with a new single "Lost One", which was released in August. It marks her first new music since she released her latest album "Reality Show" in 2015. Jazmine has filmed a music video for the new single.