Just days after declaring his endorsement for the rapper in the upcoming election, the Tesla CEO admits that he and the Yeezy designer are not on the same page in many things.

AceShowbiz - Elon Musk and Kanye West's political alliance may be broken as quickly as it's formed. Just days after announcing that he fully supported the rapper's presidential bid, the SpaceX founder hints that he's reconsidering his support for Ye.

Replying to a person's tweet that criticized his support for the Yeezy designer, the 49-year-old technology entrepreneur suggested that he and the "Follow God" spitter are not on the same page in many things. "We may have more differences of opinion than I anticipated," so Elon wrote in the now-deleted tweet. 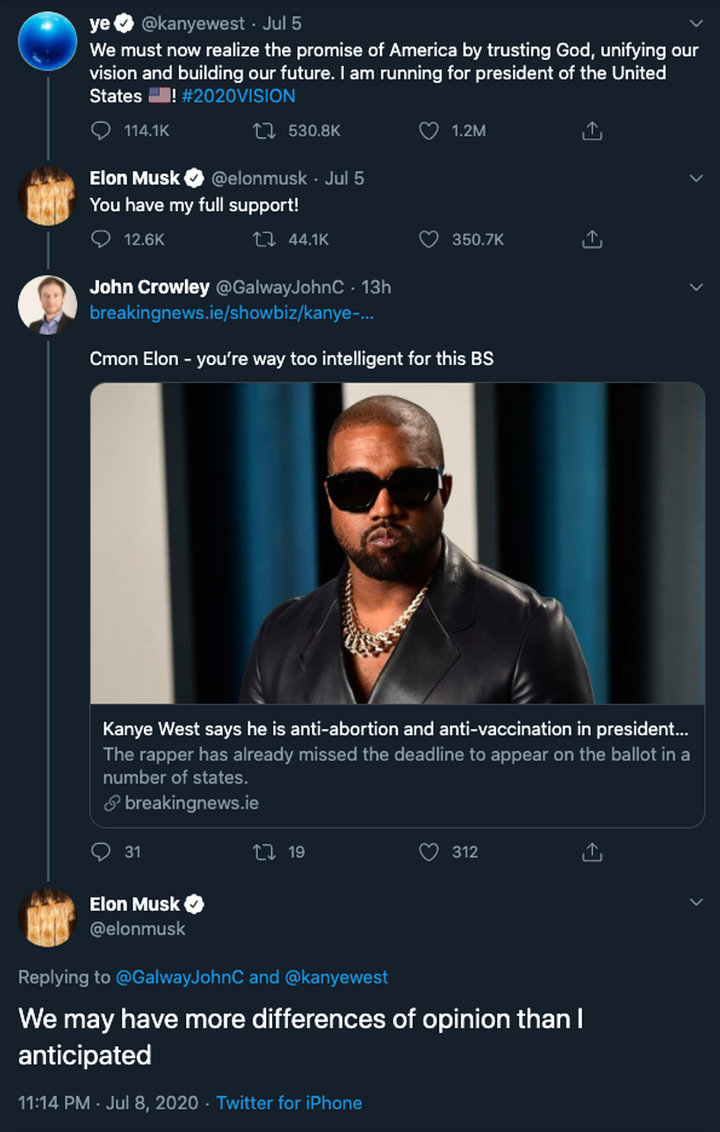 On Saturday, July 5, Kanye shocked everyone as he announced that he's going to run for the White House. "We must now realize the promise of America by trusting God, unifying our vision and building our future. I am running for the president of the United States!" he tweeted, adding his slogan #2020VISION. Elon immediately commented under the said post, "You have my full support!"

Also having a change of heart about Kanye's presidential run is Masika Kalysha. The former "Love & Hip Hop: Hollywood" star said she would no longer vote for the husband of Kim Kardashian after reading a Forbes article detailing his anti-abortion and anti-vaccine stance. "I read the article. Don't worry koonye ain't getting my vote. I'm flabbergasted," she wrote on her Twitter page.

In the same interview, Kanye claimed that he no longer supports Donald Trump after learning of reports that the president hid in the bunker during protests at the White House over racial injustice and police brutality. "It looks like one big mess to me," he told the publication. "I don't like that I caught wind that he hid in the bunker."

Responding to Ye's statement, Tomi Lahren ripped the GOOD Music founder and mocked his campaign. "So Kanye is no longer a Trump supporter (never was) and is going to run under his own party, the 'Birthday party.' Yeah...stable genius right there," she wrote on Twitter. "I'm so glad so many 'conservatives' jumped on that bandwagon. Good job!"

40 Cal's Missing Daughter Believed to Have Died of Suicide