For the virtual award-giving event, the 'Black-ish' star can be seen donning a white jacket and yellow top underneath and opting for an ash blonde wig, which many troll her over online.

AceShowbiz - Marsai Martin was among the presenters at the 2020 BET Awards, which took place virtually on Sunday night, June 28. The 16-year-old young star was tapped to announce the winner of Best Female Hip-Hop Artist award that went to Megan Thee Stallion.

In a post on the official Twitter account of BET Award, the "Black-ish" star could be seen donning a white jacket and yellow top underneath. For her hair, Marsai opted for an ash blonde wig, which many trolled her over online.

"Marsai Martin's wig is bigger than she is," a troll tweeted not long after her appearance. "Not Marsai Martin in her mamas wig," someone else echoed the sentiment, while another hater added, "Now Marsai Martin now that she had a grown woman wig on...that wig is too grown for ME. love her tho! do you sis! lol."

Marsai appeared to catch wind of the ridicule. The actress later addressed the trolling in a tweet which read, "Sorry some of y'all don't like my hair. Or teeth ... which are my actual teeth btw. Good thing I don't put my effort into trying to please everyone. I like it. Chile I'm 16 this year, let me live. I'm trying to stay sane in quarantine. Enjoy the #BETAwards." 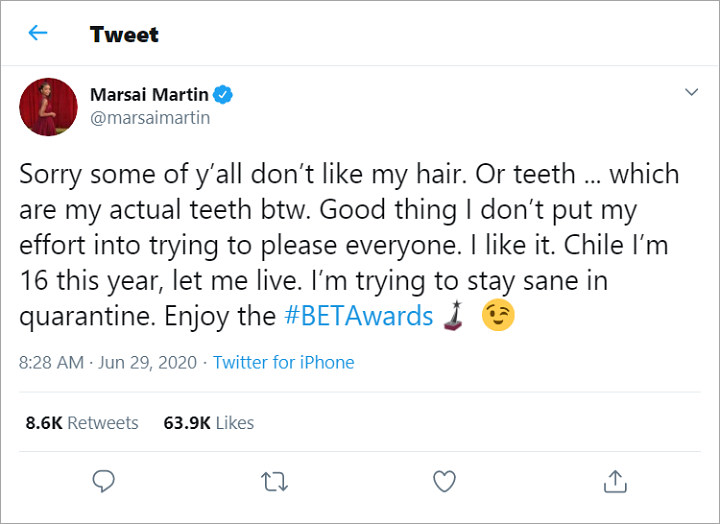 Marsai Martin addressed the trolling in a tweet.
See also...

She also talked about the trolling in an Instagram video. "So I was on Twitter, and a lot of people have been addressing my hair, talking about my hair and how it looks like a grandma's wig, and I don't...," she said before dramatically acting as if she was about to cry. "I'm sorry to anyone that I offended or haven't gone to your expectation about how I am supposed to be, and I apologize. I never want to hurt anyone's feelings... I'm sorry."

Marsai then pretended wiping her snot with a 100 dollar bill before she quit her acting. "Y'all, we're in quarantine. I mean, we got more to focus on than just my hair," she concluded.

Some fans fortunately came to her defense. "While y'all are worried about her appearance, did you catch her message?!?! Have you contacted the Kentucky DA? Is it on your to-do list?!?! Y'all worried about a lace front while this Queen is tryna get you worried about the front lines!" one supportive fan replied to Marsai's tweet.

"Who doesn't like what?? You looked beautiful," another user convinced Marsai. One person added, "Who's talking s**t about our baby?"