The far-left activist stands by his comment despite the backlash after suggesting that all statues depicting Jesus as white European should be taken down.

AceShowbiz - Amid the Black Lives Matter movement, historic monuments and statues of certain controversial figures have become the targets of anger and vandalism. Now Shaun King has gone to the extreme, suggesting the removal of all statues depicting Jesus as white European because he compared them to "white supremacy."

"If your religion requires Jesus to be a blonde haired blue eyed Jesus, then your religion is not Christianity, but white supremacy," he tweeted. "Christian whiteness, not white Christianity, has been the primary religion of this country for hundreds of years."

He continued in another post, "Yes, I think the statues of the white European they claim is Jesus should also come down. They are a form of white supremacy. Always have been. In the Bible, when the family of Jesus wanted to hide, and blend in, guess where they went? EGYPT! Not Denmark. Tear them down."

"Yes. All murals and stained glass windows of white Jesus, and his European mother, and their white friends should also come down. They are a gross form white supremacy. Created as tools of oppression. Racist propaganda. They should all come down."

Needless to say, Shaun's tweets earned him a lot of criticism, with one writing, "Ok that's a bit extreme..." Another declared, "I'm unfollowing for this." One other fan disagreed with him, reacting, "I'm all for the movement but it feels like your attacking religion with this."

A fourth user echoed, "Your taking this movement in another direction I can't support you if you telling people to tear down place of worship. Delete this post man. I stand by you 100% on everything you been saying, but you took a hard left turn on this one."

But Shaun stood by his remarks and mocked people's reactions. "Hilarious," he wrote in an Instagram post along with a screenshot of headlines about his controversial statements. "If you Google 'Jesus' right now it's me that comes up first." He reiterated, "They are triggered. Again, if your faith requires Jesus to be a blonde haired blue eyed British man, then your faith is not Christianity, it's whiteness. You are worshipping whiteness."

The civil rights activist later claimed that he has been receiving death threats over his controversial statements. "Received about 20 death threats in the past 12 hours since I said that statues of white European Jesus are a tool of oppression for white supremacy and should be taken down. It pretty much proves my point. Your religion is actually whiteness with a Christian patina," he tweeted. 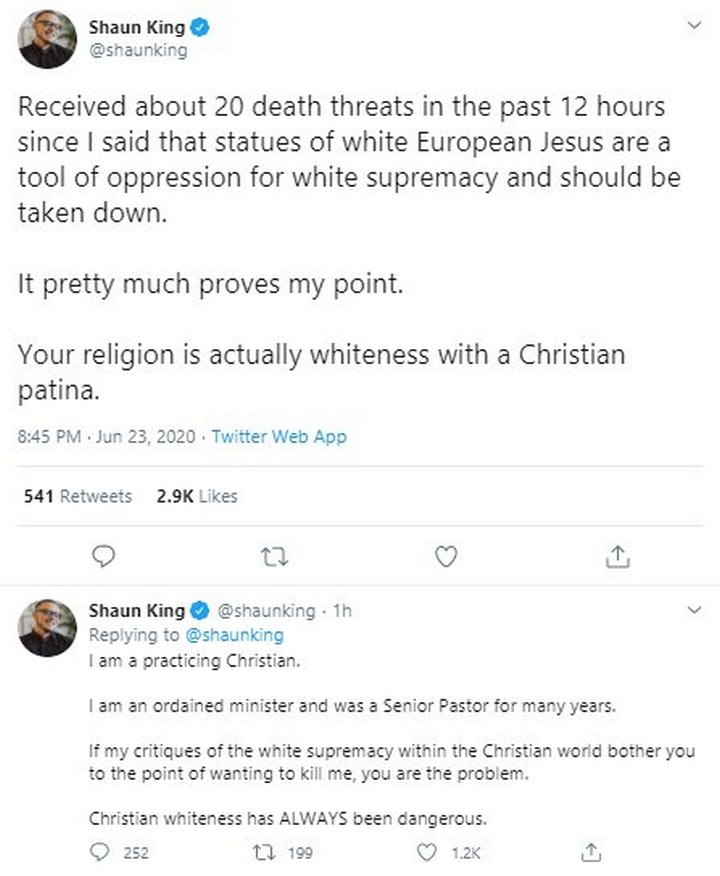 Clapping back at the critics, he added, "I am a practicing Christian. I am an ordained minister and was a Senior Pastor for many years. If my critiques of the white supremacy within the Christian world bother you to the point of wanting to kill me, you are the problem. Christian whiteness has ALWAYS been dangerous."