The good friend of Meghan Markle issues a public apology after the lifestyle influencer called her out for threatening her following their disagreement over the Black Lives Matter movement.

AceShowbiz - Jessica Mulroney is owning up to her mistake amid the Black Lives Matter movement. One day after being called out by for using her "white privilege" to threaten influencer Sasha Exeter's livelihood, the good friend of Meghan Markle has her "I Do, Redo" series pulled off the air by Bell Media, and she was quick to accept her blunder.

"The events that have transpired over the last few days have made it clear that I have work to do. I realize more than ever how being a white, privileged woman has put me far ahead of so many, and in particular those in the Black community," Mulroney began her statement posted on Instagram Story on Thursday, June 11. "And while I can't change the past, I can do my part to do better in the future."

Claiming that she respected the decision made by CTV, the 40-year-old stylist took it further by announcing her choice to step away from her professional engagements. She added that she will be using the time "to reflect, learn and focus on my family." In her statement, she also clarified, "I have no intention of pursuing any legal action. I was wrong, and for that I am truly sorry." 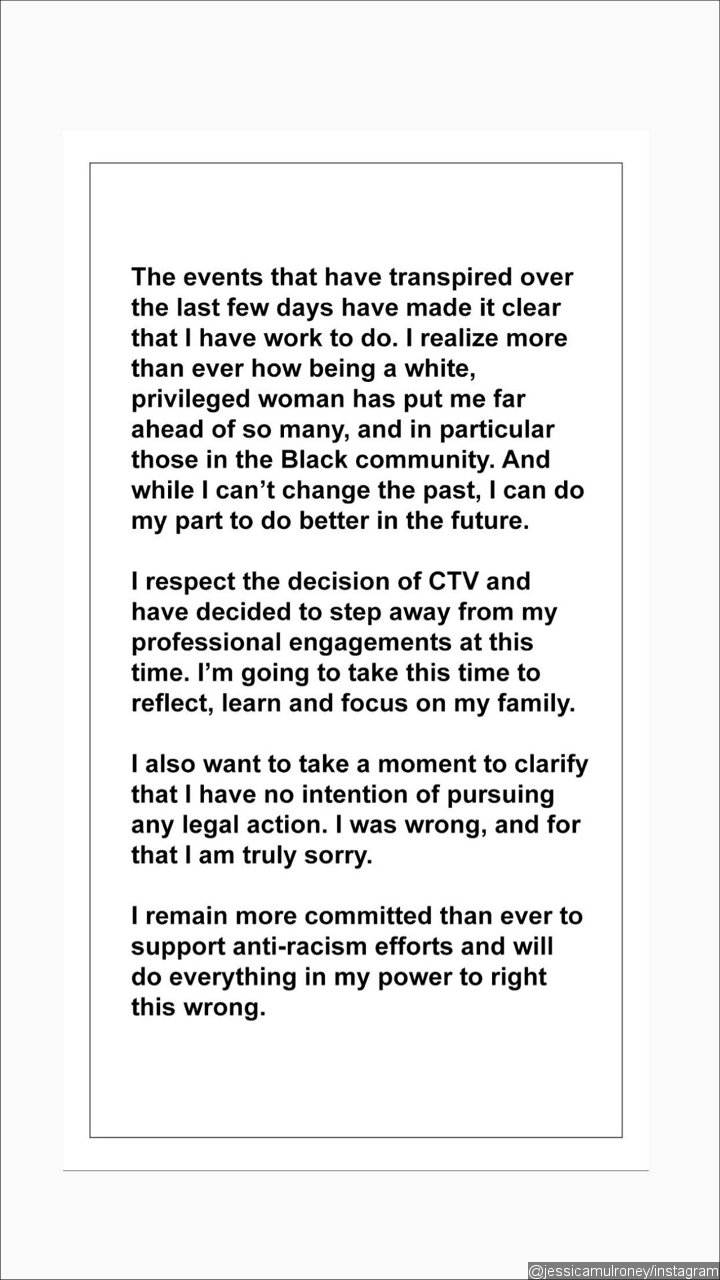 Jessica Mulroney reacted to CTV's decision to pull 'I Do Redo' off the air.

Mulroney came out with the apologetic post shortly after CTV announced her firing. "Because recent conduct by one of our shows hosts, Jessica Mulroney, conflicts with our commitment to diversity and equality, CTV has removed 'I DO REDO' from all Bell Media channels and platforms effective immediately," the media company declared.

Mulroney herself was slammed by Exeter in a 12-minute long video the latter posted on Instagram on Wednesday, June 10. According to Exeter, the two of them argued offline over white privilege and racism after Mulroney took "offence to a very generic call to action" she made on social media to "help combat the race war and what's happening to the Black community."

"What happened next was a series of very problematic behavior and antics that ultimately resulted in [Mulroney] sending me a threat in writing last Wednesday," Exeter further recalled. "Listen, I am by no means calling [Mulroney] a racist but what I will say is this, she is very well aware of her wealth, her perceived power and privilege because of the color of her skin. And that, my friends, gave her the momentary confidence to come for my livelihood in writing."

Exeter went on to reveal that Mulroney claimed to have spoken to "companies and people about the way you have treated me unfairly," leaving her "paralyzed with fear." She added, "For her to threaten me - a single mom, a single black mom - during a racial pandemic blows my mind. The goal here is genuine, transformative change - not optical and performative bulls**t. You cannot be posting that you stand in solidarity while attempting to silence somebody via text."

In response to Exeter's accusations, Mulroney issued a separate apology. "I want to say from my heart that every word of my apologies to Sasha over the course of the last two weeks privately, and again both publicly and privately today is true," she said in an Instagram post. "I did not intend in any way to jeopardize her livelihood. We had a disagreement and it got out of hand. For that I am sorry."

Mulroney continued to share her commitment to make a better use of her platform. "As I've considered what to say publicly, I recognize that isn't enough," she wrote. "That is why I'm going to be stepping back from social media in the coming days and giving my microphone to Black voices by having them take over my account and share their experience."

Kandi Burruss Gets Emotional Over Talking to Son About Police Brutality